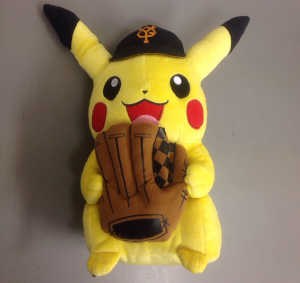 Pokemon, a Japanese media franchise owned by Nintendo, was launched in 1996 and is a contraction of Pocket Monsters. On its launch year, the Pokemon plush toys were also introduced like the Bell Plush or the Suzunari Pokemon Plush. This was a series of 3 sets totaling 49 plush toys by Banpresto which stopped production in 1997. These plush toys are about 3 inches high and are sold with a cord and a bell. Many collectors consider these 49 toys to be the rarest of all Pokemon plush toys. In fact, they are now selling for as much as $150 each.

Another Pokemon stuffed toys series is known as the Canvas plush series which was launched in 2006. They are known by their minky fabric which is a soft micro-fiber material commonly used for blankets. They are creatively designed to look like a painting in pastel shades. The older Canvas Pokemon stuffed toys are rarer and therefore more expensive. There are also mini Canvas plush toys aside from the usual 3 inch average.

Pokemon Plushies Among the Most Famous Plushies in the World 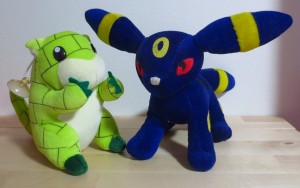 Plush toys are categorized according to size, maker/affiliate seller, and features. Some of the top affiliates/sellers are the Pokemon Center, Nintendo, Bandai, Banpresto, and Tomy Takara. These plush toys are also sold according to their features. For instance there are the talking and dancing Pokemon plush toys, Pokedolls, plush keychains, minis, and the UFO Game Center Prizes.

To give you an idea of how these Pokemon stuffed animals are sold, you can search for it based on the year it was released, by the manufacturer, or whether it was a game prize or a retail toy. For instance, the 2007 Banpresto UFO game prize known as Spiritomb might be hard to find if you decide to hop from store to store. This is because it was never sold anywhere except as a second hand toy. The Spiritomb Ufo Catcher came out as prize in arcades and game centers located only in Japan. Today, it is no longer in production and can only be bought in online auction sites or maybe if you’re lucky in yard sales for about $20 to $50 each.

The Rarest of All Pokemon Plush Toys 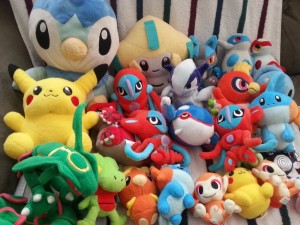 With Pokemon, the rarest will always be a little bit subjective because somehow it will be based on which character you relate to most. However, on the mainstream forums, it can be gauged that the plush toys with ribbons and sold or released in Japan tend to be more in demand. There are 2 reasons for this: One, they are exclusive to Japan and two; they are more expensive to bring back to your own country especially if you buy from Japanese websites. A few examples would be the Cyndaquil Reverse Pokeball Plush, the Bisharp, and the Contest Ribbon Torchic.

Looking for Pokemon plushies from Japan? Be sure to check out From Japan!