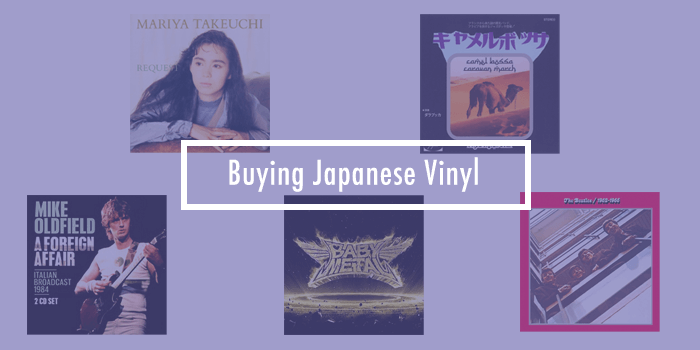 Over the last few years, vinyl records have seen an impressive resurgence in popularity. What once was a dying audio medium is now a booming industry like it once was decades ago. While many people today use online streaming services to listen to music, they are also buying vinyl records of their favorite albums to proudly display on a wall or in a display case. A good amount of people even claim that the sound of a vinyl record is just better than any digital format. For these reasons, it’s easy to see why the popularity of vinyl records has outlasted that of other physical mediums such as cassettes and CDs.

The big draw in purchasing a vinyl record is that they are the perfect collector’s item. They can be easily displayed, there are hundreds of thousands of them, and there are a significant number of rare and valuable records. Some of these rare and valuable records can only be found in Japan. Many vinyl enthusiasts have a desire to collect records from all over the world, and Japan is one country that also has a large vinyl record industry. If you’re a collector and want to bolster your collection with Japanese records, here are some of the things you need to know:

Why Would You Buy Vinyl From Japan?

There are many reasons why one would want to buy vinyl records from Japan. Perhaps the biggest reason is that Japanese vinyl pressings have a reputation for being higher quality than many Western counterparts. This can be directly contributed to the fact that in Japan, records are pressed in smaller batches and thus quality control could be more easily executed. A major perk to a higher quality record is the reduction in surface noise when playing the record on a turntable. A possible reason for the increased quality besides just more efficient quality control, is that Japanese vinyl makers have been known to use different materials such as “virgin vinyl”, which is 100% pure vinyl and has not been recycled previously.

Another reason to buy vinyl from Japan is that from a collector’s point of view, Japanese records are simply harder to acquire and thus rarer. Whether it’s a record from a Japanese artist, or a popular Western artist, Japanese vinyl sticks out more when displayed on a wall or in a case. Japanese records often come with what’s called an “obi”, which can be translated into English as “belt” or “sash.” The obi is a piece of paper that is wrapped around the left side of the album cover that contains information about the record. To a collector, a popular Western album with a Japanese obi is much more interesting than one without. Every year more and more people are moving to purchase their records from Japan due to the aforementioned advantages.

What Vinyl Can You Buy From Japan?

In Japanese record and music stores you will likely find many popular Japanese city pop artists such as Anri and Tatsuro Yamashita as well as popular Western artists like The Rolling Stones and The Beatles. More modern and up and coming musicians are also having their albums released on vinyl as it is once again a very popular format.

Depending on where you go, you will find vinyl records for artists from many different countries covering many different genres. In Japan, you will find vinyl records for Japanese rap, American rap, hip-hop, R&B, city pop, house, techno, indie, and more. Essentially any genre you can think of, it is being sold on vinyl in Japan. No matter what artist’s work you are interested in collecting, you will likely find a Japanese record counterpart that comes with the sash and other unique visual aspects that will make the album an exciting and welcoming addition to your wall and/or display case.

Buying items such as vinyl records from Japan while living in a different country can be difficult and expensive. Fortunately, using our simple proxy service as an intermediary can make the process quick and painless. Simply find a product that is being sold (including auctions) from Japan, let us know where the product is, we will get the item for you and store it in our distribution center, for up to 45 days. We will then quickly ship the item to you and then all you have to do is wait for your goodies to arrive! In most cases, FROM JAPAN can even pre-order an item for you using the same process.

Using our proxy service will make adding Japanese records to your vinyl collection quick, easy, and straight forward. If you would like to get into collecting as a hobby, or simply bolster your collection, be sure to check out FROM JAPAN for your Japanese shopping needs! You can also see our guide to ordering off Disk Union, one of Japan’s largest record retailers here!

Search for vinyl records on FROM JAPAN
タグ: music