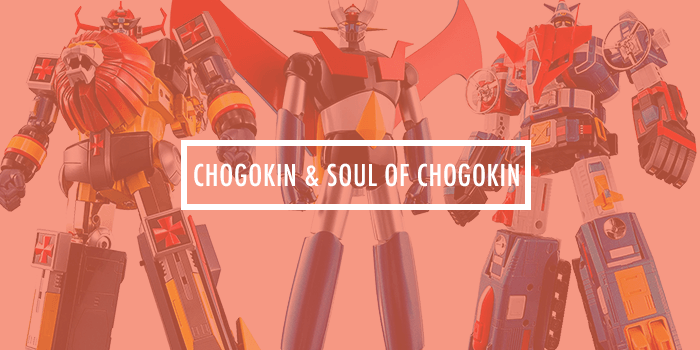 Chogokin (超合金) is a brand of toys and super robots aimed at collectors. The most popular line in the brand is Soul of Chogokin （超合金魂）, which features updated versions of the original toys produced by the company.

Chogokin is arguably the first brand of Japanese anime toys and super robots. Read on to find out more about these popular Japanese super robots and where you can find them.

In Japanese, Chogokin translates to “Superalloy.” Go Nagai coined the term in his hit anime and Manga called Mazinger Z. Later, in 1972, Poppy, which is owned by Bandai, adopted Chogokin as the name for a line of die-cast metal toys and robots.

The first Chogokin model was called “GA-01 Mazinger Z.” Although it was faulty and the company had to replace, it revolutionized the Japanese toy industry.

Generally, Chogokin toys come in DX or ST sizes. The ST or standard-sized toys are usually 5 inches tall while the DX or deluxe toys are much larger, come with more features, and sophisticated weaponry.

The Godaikin range was among the first line produced by Bandai in the early ’80s. The name loosely translates to “big alloy” and featured robots of up to 12 inches. The line drew inspiration from a wide range of anime, especially from the Tokusatsu series.

However, the price tag and competition from cheaper super robot lines such as Gobots and Transformers led to the decline of Godaikin. Still, the company continued producing them, and they are still available in second-hand market places.

In 2000, the company introduced the Souchaku Henshin series, which also features characters from the Tokusatsu series.

The Soul of Chogokin (SoC) is by far the most popular line from Bandai’s Chogokin brand. Mecha robots from anime series from the ’70s and ’80s such as Leopardon (Japanese Spider-Man) and Battle Fever J. inspire soC models. However, occasionally, Bandai produces SOC models from newer anime series such as Neon Genesis Evangelion from the ’90s.

The first SOC model (GX-01) was Mazinger Z, from the series by the same name. Bandai has produced many other SOC models from characters in the series, such as Doublas M2and Grada K7. There are also renewals such as Great Mazinger and Mazinger Z DC.

The company also produces accessories for the SoC line, such as the Motorized Hangar for the Mazinger Z, Drill Spacer for the Grendizer, and the Secret Super Weapons Set 01, for the DC models.

Bandai also rewards fans with limited items released through coupon codes in the manga magazines and original CDs. Some of these limited items are announced during exhibitions.

If you’re a fan of Manga and anime produced later than 1980, you should consider the SoC SPEC series. The SPEC series focuses on robot characters from the late ’80s and ’90s, such as SPT Layzner, Neon Genesis Evangelion, and Metal Armor Dragonar.

Some of the upcoming SoC models include Arcadia, from Space Pirate Captain Harlock, and Black Wing from Dancouga – Super Beast Machine God.

Search for Soul of Chogokin

This line mostly focuses on characters from Super Robot and Super Sentai anime series. Some of the popular models in this line include Mazinger Z, Majin Emperor G, Steel Jeeg, and Mazinkaiser.

Super Imaginative Chogokin (SIC) is a super robot’s series that focuses on the Kamen Rider franchise. The first SIC, Kikaider, debuted in 1998. Bandai regularly updated the series until 2016, with the Kamen Rider Drive – Drive Type Speed.

Buy Chogokin with FROM JAPAN!

Are you looking for any Chogokin model? The best place to find Chogokin is from the source itself – Japan! However, many Japanese online stores and auction sites do not ship abroad or accept non-Japanese payment. But that’s where FROM JAPAN comes in! Using FROM JAPAN’s proxy bidding and shopping service, you can buy and receive all manner of Japanese products otherwise unavailable. Start your Chogokin shopping today with FROM JAPAN!