Whether browsing the web for the latest anime figure releases or searching for that must-have memento from your favorite series, we’ve got your wish list covered with these 10 new anime figures coming out in spring 2017.

Half human and half servant, Shielder is shrouded in mystery, and Aniplex’s figure of the popular Demi-Servant captures every facet of her complex identity. Fitted leather armor and an impenetrable shield leave little doubt that Shielder is a guardian spirit; but her soft smile hints at the human vulnerability hidden beneath the heroic persona. The 2017 Fate/Grand Order anime released earlier this year introduced Shielder to even more fans, so summon her into your collection before other Masters recruit her this March.

As the strongest martial artist in the Port Mafia, Nakahara is a force to be reckoned with—but it’s hard to take Mr. Fancy Hat quite so seriously when he’s a chibi. Even so, this tiny Nakahara comes packed with as much personality as his anime counterpart. An assortment of facial expressions, ranging from humiliated to intense, and removable attire allow you to recreate Nakahara’s best mafia moments. Pair him with former Executive Dazai for a showdown of Nendoroid proportions!

Naruto fans have been asking for this Nendoroid almost as long as Naruto has been asking to become Hokage. With multiple face plates to choose from, you can depict Naruto at any stage of his Shippuden adventure: awakening his Sage Mode and Rasenshuriken, channeling the Nine Tails power, or preparing his trademark Shadow Clone Jutsu (stock up on extra Naruto Nendoroids to complete the effect)! Also, don’t forget to look for Nendoroid Sasuke due out in June, since he comes with special parts to create the Unison Sign between his and Naruto’s hands.

Aniplex’s poignant Kaori Miyazono figure is a tribute to Your Lie in April’s emotional artistry. A deep blue sky spreads beneath Kaori’s feet as she sways in rhythm to the music of Beethoven. Fine details masterfully capture the polished soundboard of Kaori’s violin and the semi-translucent frills of her dove-white recital dress. As a final “note,” Kousei’s black cat is also included—perhaps a sign that Kaori’s accompanist will soon get a figure of his own to match. Kaori takes the retail stage in April.

Search for Aniplex – Your Lie in April: Kaori Miyazono

The self-conscious Yamanbagiri may not get a confidence boost from his littlest figure yet, but he’s sure to appreciate Good Smile Company’s incredible attention to detail, proving he’s “no fake.” Every decorative knot and button, and even the tiny hole in Yamanbagiri’s hood, are faithfully replicated from the Touken Ranbu game. Add him to your figure army this April (just don’t call him “pretty” if you want him to stick around).

Kotobukiya’s Sorey release this spring is technically a “rerun” from 2015 (when the original Tales of Zestiria video game hit the shelves), but for a good reason! Thanks to this re-release, otaku who fell in love with Tales of Zestiria through the recent anime don’t need to quest across Glenwood to obtain this heroic figure. Garbed in his decorative Shepherd’s raiment and wielding the crimson Ceremonial Sword, Sorey’s figure is a faithful replication fit for a seraph.

If your “Quirk” is collecting My Hero Academia figures, then prepare your collection for Izuku! Good Smile Company has supercharged the tiny hero-in-training with dynamic expressions, superpower effects, and “super” accurate costume colors. These features combined with tiny details like his freckles and stocky punching gloves may even convince you he’s stepped right out of the anime into the real world. Prepare to bring the power of the “One for All” home this April.

With mic in hand, Umi is ready to treat you to an exclusive performance. The lead singer of idol group Lily White is dolled up in her flower-strewn stage outfit, and the yellow carnation in her hair brings out the amber color of her sparkling eyes. Bursting with sweet energy, Umi is sure to brighten your collection, so put her on pre-order before she stars in another fan’s show.

It’s hard to believe that Cowboy Bebop is nearing its 20th anniversary! This ambitious figure of Spike Spiegel is the perfect way to celebrate the critically praised anime. The infamous bounty hunter comes in a standard version, but we strongly recommend the deluxe version to all serious space cowboys if you can get your hands on it (see video below). The limited DX edition includes an extra expression, a removable coat, and an additional arm to hold Spike’s cigarette or rose. Have your Woolong ready to pre-order this figure ASAP! As a Kotobukiya exclusive, the Deluxe Version is sure to sell out faster than you can say “bang.”

Kaito, Vocaloid’s most popular male vocalist, embraces his Japanese roots in this ultra-detailed figure from Stronger. As part of the new Hanairogoromo series, Kaito looks especially handsome alongside the previously released Hatsune Miku and his original singing partner Meiko (also due for release in May 2017). Garbed in traditional indigo blue, Kaito carries an oil-paper parasol over his shoulder while standing on a pastel-brushed mural. This is the scaled Kaito figure fans have been asking for, so put him on pre-order before he’s completely sold out!

There are many new anime figures scheduled for release in spring 2017, but those listed here are especially in high demand and likely to sell out fast. If you want any of the

Figures on this list or are searching for other rare must-haves to add to your otaku collection, shop FROM JAPAN for Japan’s best anime figures!

And don’t forget to check out our picks for 2016’s best winter anime figures! 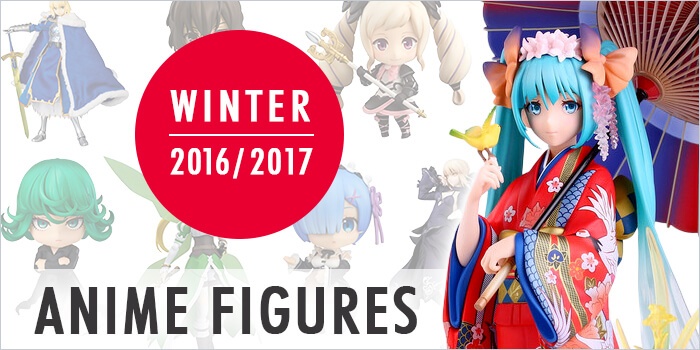