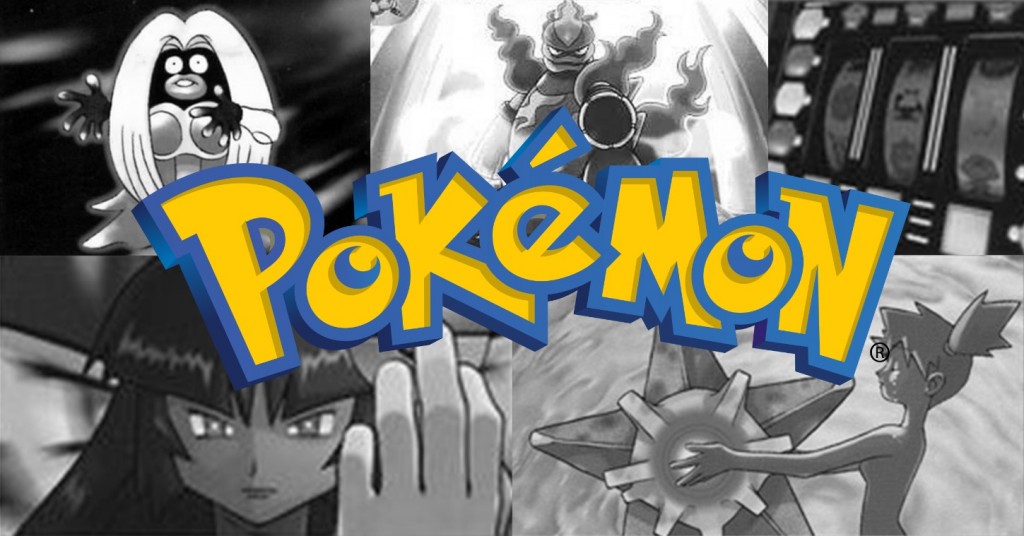 Perhaps you’ve heard of the infamous “Pokemon Shock”—when Pikachu used an electric shock attack on a missile in episode 38 of the anime… and simultaneously gave 685 children epileptic seizures.

From banned episodes (James’ infamous bikini contest), to religious accusations of Satanism (the “Pokemon Rap” backwards), Pokemon is no stranger to controversy.

Among die-hard collectors, however, no aspect of Pokemon lore has been censored so much as its trading cards. Prepare your Counter Shield before reading any further, because what you find below may be as shocking as Pikachu’s trademark Thunderbolts! Here are the top eight banned Pokemon cards:

What Should you Collect? English or Japanese Pokemon Cards?

Before beginning your collect, it is always best to compare the differences between the two. Aside from obvious censoring differences, English cards have had many deviations from their Japanese counterparts—deviations that have led many fans to claim that the original Japanese cards are superior.

One of the primary differences are the cards’ borders. Japanese cards feature sleek, silver (sometimes holographic) frames; whereas English cards beam with banana-yellow borders. However, it’s more than mere color and image variations that distinguish Japanese and English cards. With one touch, more differences become clear—Japanese cards feel smooth and glossy to the fingertips, and light-weight when held in the palm of the hand; American cards, by contrast, feel more “papery” to the touch and relatively “cheaper.”

Lastly, first edition Japanese cards feature a “first edition” mark on their bottom left-hand corners, which makes them more appealing to collectors. While English cards maintained this feature for a brief time, this is no longer the case.

In a franchise like Pokemon, where “banned” episodes and censored memorabilia thrive, fans and collectors are given all the more reason to search out these rare, controversial pieces of Pokemon’s electric history. Pokemon cards offer the best in would-be banned material that none-the-less deserves a place in any collector’s deck of trading cards. From deformed cows to obscenely-gesturing gym masters, you’ve “gotta check ‘em all!” 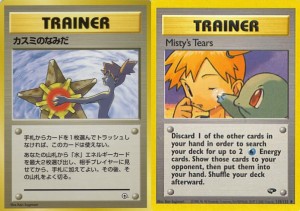 The notorious “Naked Misty” card features the iconic heroine shedding bitter tears for her wounded Staryu. Upon its localization, however, fans shed tears of their own when the much-coveted card received a kiddie-friendly makeover, due to differing cultural interpretations of nudity. While Japanese consumers viewed the card as a symbol of innocence and purity, overseas distributors pondered the parental backfire of putting an uncensored “Misty’s Tears” into the hands of prepubescent Pokemasters. The compromising result? A naïve Squirtle pawing away a tear from Misty’s eye—a much more literal portrayal of the card’s name, perhaps, but one that has continued to disappoint hardcore fans to no end. 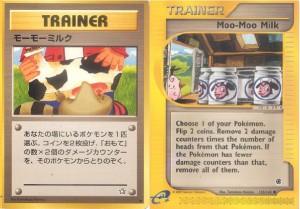 Why has this cow been reduced to a headless, legless, tailless stump? Why has this trainer collected this deformed cow for the purpose of feeding his Pokemon? These disturbing questions, coupled with the imagery of the Sentret taking its nourishment directly from the source, transforms the Moo-Moo Milk card into an “utter-ly” unsettling barrage of nightmare fuel. 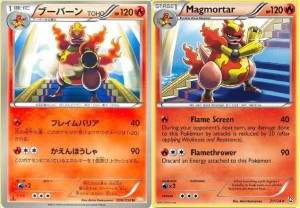 Pokemon is no stranger to firearm censoring, as seen when the anime’s 35th episode (“The Legend of Dratini”) was banned from the English lineup altogether, due to multiple scenes where Ash and his friends had revolvers shoved in their faces. In the case of Magmortar, it’s likely that his Dragons Exalted card received censoring due to the smoking barrel of his flamethrower, which American audiences found all too reminiscent of a gun. 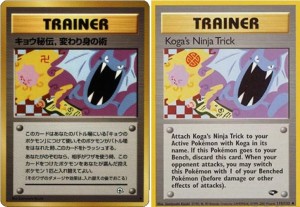 At a single glance, Koga’s Ninja Trick appears to advocate Nazi propaganda—no doubt a valid concern of English localizers who saw an inverse Swastika in the yellow smoke alongside Ditto. In reality, this Buddhist symbol, the omote manji—an oft-censored icon that has appeared in several Japanese franchises, from Naruto to Bleach—is a symbol indicating the importance of balance and harmony. Given the cultural origin of Pokemon, this symbol suits its themes, but even Japan recognized the negative connotations of the symbol’s mistaken identity, and eventually censored it for the card’s re-release. 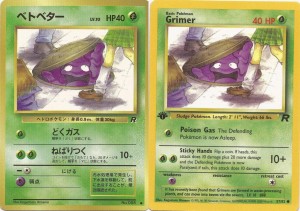 What’s Grimer doing in that manhole? More importantly, is he sneaking a peak up a girl’s skirt? Or does the girl just happen to be within Grimer’s ill-timed line of sight?

These are the questions that localization was unable to answer, and thus (to avoid controversy) redrew Grimer’s eyes to give him a more neutral, less suggestive, expression. The artist behind this would-be “peeping glob,” Kagemaru Himeno, vehemently denied that the wandering gaze was intentional. Whatever the real reason for the ill-placed glance, the Grimer card sent collectors racing to online auction sites to import the uncensored, original version of the card for their personal trading decks. 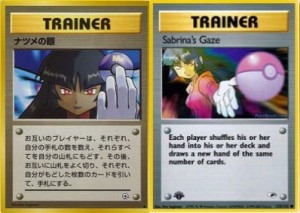 Perhaps the card’s real title should have been “Sabrina’s Bird,” as English audiences must have inaccurately interpreted it. Despite clearly holding a Master Ball in her hand, Sabrina incited localization dread that her inward-facing hand and prominent middle finger could give rise to a very different meaning. In order to avoid inevitable controversy from parents, “Sabrina’s Gaze” was given a side-long makeover to feature the red-eyed gym leader hurling a Pokeball at the viewer. 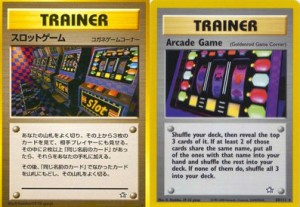 Pokemon’s recurring “gambling” features have long been the target of censoring, so much so that the infamous Game Corners have either been removed or significantly altered in the most recently released Pokemon titles. All Pokemon cards dealing with the series’ notorious gambling are cropped to remove some of the more obvious, casino-esque giveaways (grounded seats, words like “slot” and “card,” and the telling rows of gambling machines). These censored cards may resemble arcade games to younger players, but the cards’ more mature implications aren’t likely to fly so easily over the heads of older collectors. 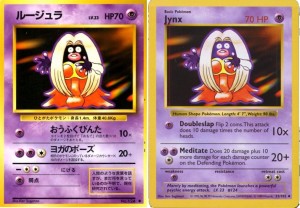 No single Pokemon has been as oft-debated and censored as Jynx–a humanoid, ice/psychic Pokemon, whom critics and concerned consumers alike have accused of racism; namely, of depicting “blackface.” Given her resemblance to certain 1900’s cartoons caricatures with that exact intent in mind, it’s easy to understand why Jynx would be at the heart of such controversy. Answering the cries of outrage, The Pokemon Company ensured that all anime episodes depicting Jynx were formally banned from American television, and all cards depicting Jynx were recolored to give her a stark, purple tint. Since the controversy fifteen years ago, Jynx has always appeared in her censored, purple-colored form in all forms of media, both inside and outside Japan.

In a franchise like Pokemon, where “banned” episodes and censored memorabilia thrive, fans and collectors are given all the more reason to search out these rare, controversial pieces of Pokemon’s electric history. Pokemon cards offer the best in would-be banned material that none-the-less deserves a place in any collector’s deck of trading cards. From deformed cows to obscenely-gesturing gym masters, you’ve “gotta check ‘em all!”

Read our Article on The Rarest and Most Expensive Pokemon Cards.

Fullmetal Alchemist Merchandise Worthy of Transmuting into Your Collection