With details rivaling those of their big-screen counterparts, Bandai’s ever-increasing collection of Star Wars vehicles features a mastery of hobby model kits unequaled in this galaxy. In celebration of Disney’s latest theatrical release Star Wars: The Last Jedi, we’ve put together a list of 10 high-bounty collectibles that are guaranteed to make any Star Wars fan one with the Force.

This Perfect Grade Millennium Falcon is no hunk of junk. As part of Bandai’s most prestigious model kit line, the 1/72-scale replica of Han Solo’s famous YT-1300f light freighter features all its classic customizations and components within a sizable 48-centimeter (19-inch) frame, including a ventral boarding ramp, landing gear, quad laser cannons and gunner cockpit, sublight engine LEDs, and six miniature figurines (Han, Chewie, Luke, Leia, Obi-Wan and C-3PO). Brush up on your dejarik skills, because this old but capable craft is launching into hyperdrive December 2017.

Celebrated as the ship that took down the first Death Star, Bandai’s Red Squadron X-Wing Starfighter Special Set includes both 1/144-scale and 1/72-scale models, complete with tiny astromech droids. The highly detailed 1/72-scale model features an articulated cockpit cover, folding wings, detachable landing gear, and two canopy variants to display the seated pilot as desired. The 1/144-scale model puts the Battle of Yavin in the palm of your hand while keeping much of the detail of its larger counterpart.

Just as the Y-Wing Starfighter is a perfect blend of speed (at 1,000 kph) and firepower, this model kit of Koensayr Manufacturing’s finest spacecraft seamlessly combines intricate mechanical details with plenty of optional components. With droids, pilots, gear, canopies, decals, and lasers aplenty, Bandai’s kit captures the versatility of the Rebel Alliance’s iconic heavy bomber and even includes a piece of the Death Star as its base—after all, it was this vehicle that turned the tide during the Battle of Scarif.

Best known as the bane of the Imperial Walkers during the Battle of Hoth, Bandai’s Snow Speeder model kit shrinks the low-flying, two-pilot aircraft down to a collectible 1/48 scale. The modified Incom T-47 Airspeeder is fully equipped to “go for the legs” with its trailing tow cable and pinpoint laser cannons as it blasts off from an angle-adjustable tundra base. Optional airbrake positions and canopy parts add to its cool-weather range of display possibilities.

As the Resistance’s iconic dogfighter made famous by the exploits of ace pilot Commander Poe Dameron, the T-70 Boosted X-Wing Fighter mobilizes some of Bandai’s best features into one compact spacecraft with articulated S-foils, alternate canopies, landing gear, heavy laser cannons, and scaled-to-size miniatures of Poe, BB-8, and an RO-H2 droid. The X-Wing Fighter’s true standout feature, however, is its dual displays that allow you to portray every 1/72-scale detail hovering over either a space black base or a transparent aquatic base that captures the moment the rescue fleet skims across the water in aerial assault formation during the Battle of Takodona.

Perhaps no Star Wars vehicles soar with the spirit of the Resistance more than the Millennium Falcon, the Blue Squadron X-Wing Fighter, and the “Black One.” Thanks to a November release by Bandai, you can collect the pocket-sized trio in one laser blast with the Resistance Vehicle Set—just in time for the release of Star Wars: The Last Jedi. Rendered in 1/350-scale (Millennium Falcon) and 1/144-scale (Blue Squadron X-Wing Fighter and T-70 Boosted X-Wing Fighter), each spacecraft features a muted display base and marking sticker accents.

The deadly, dagger-shaped Star Destroyer symbolizes the Empire’s imposing presence and iron grip on the galaxy. Resting in the palm of your hand, this Imperial-class capital ship is perhaps less intimidating but no less impressive in its diminutive details. Bandai’s Star Destroyer Vehicle Model is simple enough for even an uncoordinated Stormtrooper to put together and costs less than a drink at the Mos Eisley Cantina, making it the perfect kit for padawan model builders.

The AT-ST served as the Galactic Empire’s primary anti-infantry vehicle during the climactic Battle of Endor, and now you can command your own army of turreted “chicken walkers” with this 1/48-scale replica. Fully articulated legs, laser cannons, and cockpit windows keep the AT-ST on alert for Rebel scum—though perhaps not alert enough if the miniature hijacker Chewbacca has anything to “Mmuurraauugghh!” about it. Additional blaster damage decals and a coniferous forest base bring even more life to this fan-favorite vehicle.

First seen by moviegoers approaching over the horizon of Hoth, the Imperial Walker represents the Empire’s military might and is a feared omen of planetary subjugation. Bandai’s AT-AT model kit convincingly miniaturizes its impenetrable armor, interior command deck, and gargantuan limbs, making it a technical force to be reckoned with as it lumbers sinisterly across a specially designed snow display. Stage the assault on Echo Base by taking control of the AT-AT’s articulated laser cannons and monolithic legs—whether striding forward in victory or harpoon-tied in defeat, you decide!

While not technically a Galactic Empire ship, Boba Fett’s Slave I was no friend to the motley team of rebels in Episode 5. This 1/144-scale replica of the modified Firespray-class ship features the weathered battle scars as seen in The Empire Strikes Back, and comes with a bounty worth of parts to reconstruct some of the film’s most dramatic moments. An adjustable angle display holds the Slave I in its iconic vertical position as it sets course from Cloud City’s landing platform toward Tatooine—with a carbonized Han Solo hidden in the ship’s operational storage hatch.

Where to Buy Bandai Star Wars Vehicle Models from Japan

Whether you’re a young padawan or Jedi Master, you don’t need to use the Force to make these kits the death-star of your collection. With the help of your local galaxy’s proxy service FROM JAPAN, you can easily have these far, far away Bandai Star Wars vehicle models and more shipped to your doorstep!

And for more Japanese Star Wars collectibles, be sure to check out our list of out-of-this-world merch. 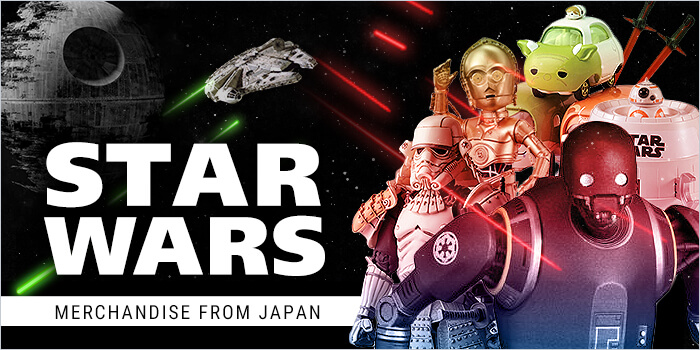