After months of browsing the Internet, you finally hunt down that special (and rare) figurine that you’ve been tracking for months.But when you finally receive that special figurine in the mail, you realize that it isn’t quite as special as you thought—despite your best efforts, you’ve actually purchased a cheap knock-off, or “bootleg,” of the real deal.If you’re a serious collector of licensed products, this is a calamity you know all too well; but if you’re a new collector, you may not be aware of just how many bootleg figures have invaded the market… or even if that figurine on your shelf is truly authentic. Let’s shed some light of legitimacy on the dark world of unlicensed products by reviewing some general advice for avoiding bootlegs and looking at some easy-to-identify warning signs.

Fake Figures Exposed: What you Should Know Before Shopping

If you’ve got your sights on a figurine, do some research on it. More often than not, the result of any online search for a bootleg product (i.e.—“Attack on Titan Levi Ackerman fake figma, figma bootleg”) will be either distinctly positive distinctly negative. Some sites and blogs offer pictures of official figures alongside their bootlegged counterparts, including written instructions concerning major differences between the two. These Internet searches will only take minutes, but could save you time, money, and the disappointment of purchasing fake figures.

This may be a given if you consider yourself a genuine fanboy or fangirl, but it really pays off when it comes to spotting bootlegs. Often, something as simple as the color of a necklace, eyes, or sword-hilt, will be enough to differentiate real figures from fake figures. With the Kingdom Hearts II Play Arts Sora figure, for example, most all of the bootleg versions include Sora’s neck-chain, but are missing the crown pendant that hangs from it. Authentic versions are accurate to the character’s design and include the chain with the crown pendant. 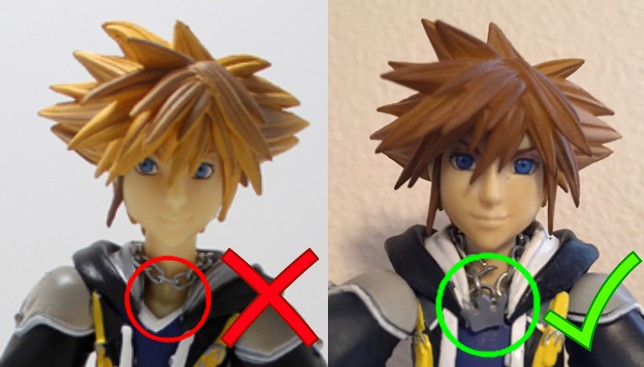 Find Out Where It Was Manufactured

If you are a collector of video game or anime figurines, the licensed product is most likely from Japan. Online buyers especially, beware. If you see a figurine being sold from anywhere other than Japan (or for some reason cannot be absolutely sure where it is from, another big indicator), there is a ridiculously high chance that it is a bootleg figure. On the other hand, buying from a seller in Japan almost guarantees that the products you purchase will be official figures.

Bootleg Figures Revealed: How to Spot One Before Buying 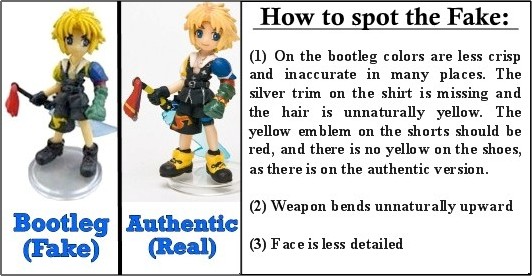 From a purely visual perspective, it is not too difficult to identify a bootleg, especially if you can hold the box/figurine in your hands and get a really good look at it. Here are some of the most common ways to spot the fakers:

If the paint looks like it’s been slopped on with a bucket, it’s almost certainly a bootleg figure. Often, poor paint jobs will contain a lack of shading in important areas, paint drips, ugly smudges and scratches, or simply inaccurate colors (vibrant yellow instead of “natural” blonde hair is a common give-away, for example). The Final Fantasy Trading Arts Mini Tidus figurine, for instance, has a red emblem on the right leg of his shorts. On the bootleg, this emblem is starkly yellow.

Another obvious sign is the facial paint job. Bootleg figures are infamous for having faces even a mother couldn’t love. If you have a bootleg, the face may look distorted, cross-eyed, or simply downright ugly. (Of course, if the character is ugly to begin with, take that into consideration when you make your purchase.)

Lastly, look for any unnatural “shininess.” Figurines with “squeaky-clean” shine marks on their faces (especially cheeks!) or clothing are likely bootlegs.

Bootleg boxart will also have some subtle differences from the real thing. Though they may seem hard to spot, a little research and careful study makes them painfully obvious. If you spot any of the following on the boxart, watch out:

Also worth noting is that, if your figurine does not come in a box when you purchase it from a seller, there’s a good chance that it’s a bootleg (unless the seller has specified that the box is missing because the figurine is used, etc.). Bootleg figures often come in plastic baggies and other non-licensed containers, as well. 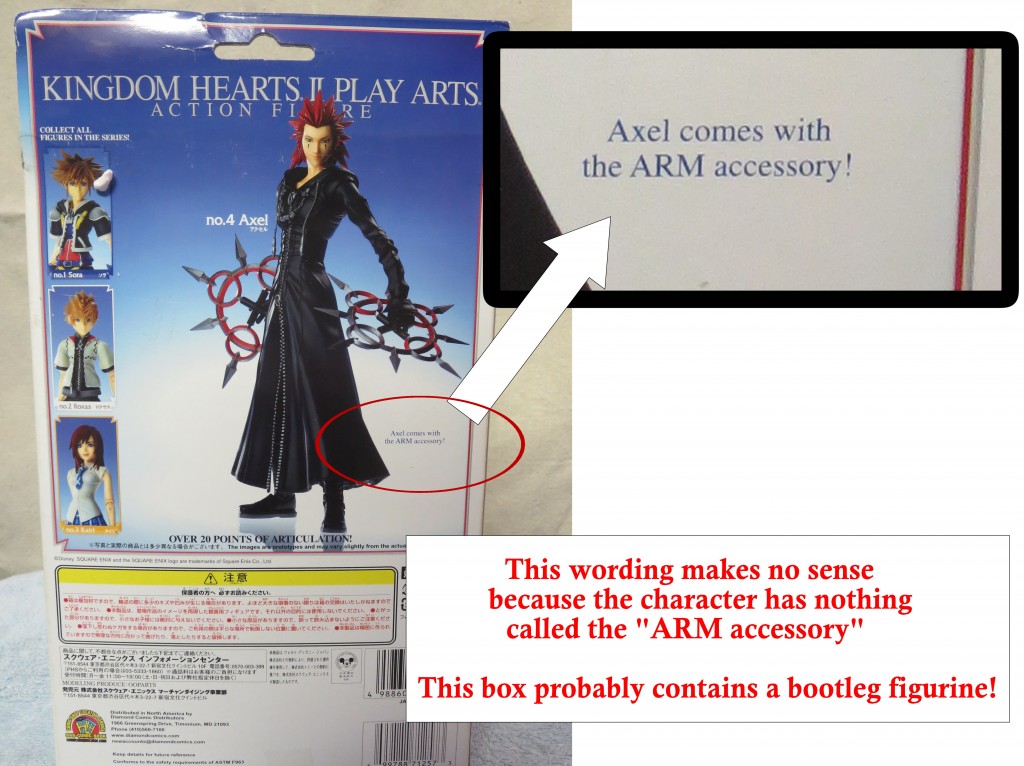 Bootleg figures are often made of cheap, flimsy plastic. Props bend easily and feel inexpensive. One of the easiest, visual ways to confirm a bootleg is to look at the character’s weapon. If it’s drooping at a hideous angle like it’s been melted with a flame-thrower, it’s fake. Legit products are often made of a firm plastic and have well-crafted, sturdy props. Bootleg figures may break more easily than their official counterparts, but, often, the licensed products are also very fragile and meant for display purposes, so this isn’t always the best indicator. 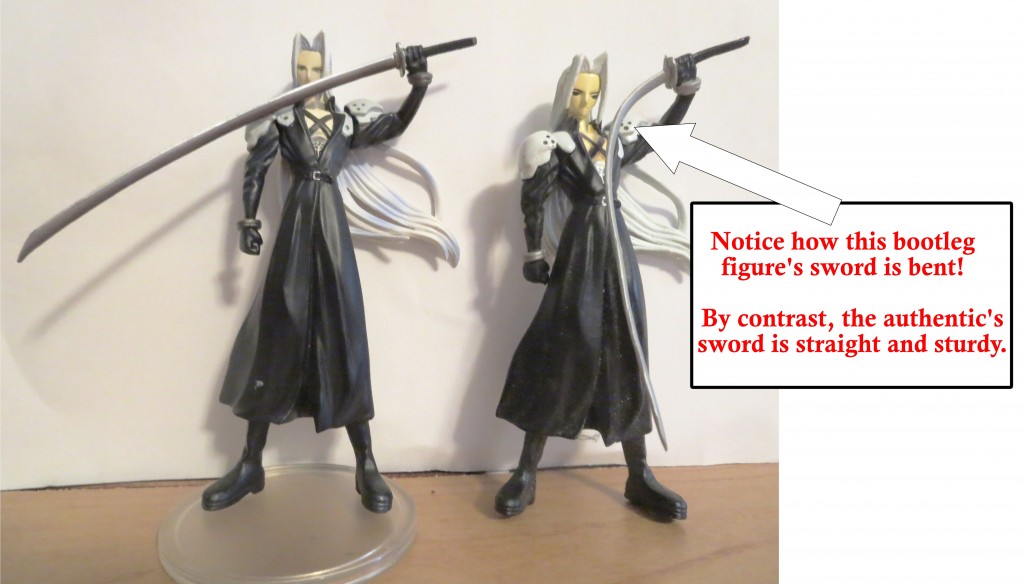 If you know for a fact that the figurine comes with skis, a sword, or a hammer, and said accessories are not included with the figurine you intend to buy, back away quickly. Unless the seller specifies that the pieces are missing, you probably have a bootleg on your hands.

If the product placement just seems off, or you’ve never heard of the product before, steer clear until further research can be accomplished. A blue-black-and-red-colored Batman riding on a white pony probably isn’t an official product.

Bootlegs often entice buyers with their incredibly “good deals.” Fake figures are often listed for a fraction of the authentic price. Paying more for your figurine doesn’t always guarantee it won’t be a fake, but it definitely lessens the odds.

Other Fake Figure Indicators After Buying

These are some other ways to tell if the figurine is a fake, although these tests cannot usually be performed until the item has arrived at your doorstep, or you purchase it from a storefront.

Official figures, when opened, will greet your nostrils with a fresh, but pungent, plastic smell. Bootleg figures downright reek and that scent will linger unpleasantly. That difference—between a nice aroma on the one hand and an unbearable stench on the other—will be very noticeable.

Some bootleg lines are infamous for having broken limbs, even before opening the box. Real figures simply don’t arrive that way! If the figurine is missing an arm or has a broken leg on arrival, check the other bootleg signs, and then consider returning the shipment.

This is especially noticeable for Nendoroid figurines. If the figurine arrives with the “incorrect” face on the figurine (i.e.—scared or angry face instead of neutral face), then it’s most likely a bootleg figure.

All licensed products contain a company trademark—usually the manufacturer’s name. This name is usually imprinted on the figurine’s foot or some other location out of sight (behind their leg, under their arm, etc.) and occasionally on the figurine’s stand instead. If you can’t find the official company trademark, you’re almost guaranteed to be looking at a bootleg. Basically, you should be wary of any product that doesn’t say “Made in Japan” on it. Some bootleg figures do imitate the manufacturer’s imprint, however, so be cautious and look for additional signs that the figure could be fake.

Real Figures: Where to Buy Them

If you decide to buy your Japanese figurines using an overseas delivery service, proceed with caution. If you receive a package that has been delivered from anywhere other than Japan, or that has arrived via a suspicious route, consider sending it back unopened. In order to avoid purchasing an unwanted bootleg figure, make sure you shop only at those stores that import merchandise straight from Japan. But of course, some companies simply don’t deliver overseas and you may need an extra leg up. If you can’t purchase your favorite figurines directly from the manufacturer, then a proxy service like FROM JAPAN can help you find licensed, official figures and deliver them straight from Japan to your door!

Guide to OffMall: An all-in-one source for Japanese secondhand fashion