Robots: those mysterious technologies from the future with A.I. for brains. Whether they cause a worldwide cyber-dominion, or become our best friends and trusted allies, we’re all secretly excited about owning a robot of our own. Perhaps the days of Mobile Suit Gundam and Evangelion are still a few decades (or even centuries) away, but Japanese robots are actually head and shoulders above those of most nations. The country has made huge strides in bringing the mechanical beings of the future into the home and workplace of today—as humanoid helpers and even toys!

Whether they’re simple toys or more advanced humanoid helpers, Japanese robots are trendy, social, and built with landmark technology you can’t get from most other manufacturers. Award-winning designs and features make them come alive with human-like intelligence and playfulness; some of them have even made history as the first of their kind! Besides just being a welcoming companion to help brighten your day, many Japanese robots serve as emotional and psychological supporters, with the ability to read your expressions and respond to them to make you feel happier and give you peace of mind. Some even resemble small animals, like dogs or dinosaurs, making them the perfect robotic pets—without the mess! From playing your favorite music, to helping you clean your house, there’s a robot for every occasion. Let’s take a look at some must-own robots that are perfect for your home. 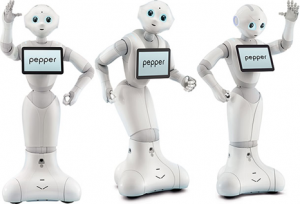 If you saw the healthcare robot, Baymax, in Disney’s film Big Hero 6 last fall, then you’ll have a good idea of what the real-life “emotional robot” Pepper can do. Pepper may not be able to apply bandages and spray antiseptic like Baymax can, but his goal is the same: to make people feel better about themselves and enhance their relationships with others.

Using his two HD cameras and 3D-depth sensor, Pepper is able to read your emotions and tone of voice and respond to you in over 17 different languages. Because he’s a learning robot with real-time usage updates, Pepper becomes more familiar with you the longer you spend time together. His goal is to increase your well-being and social growth through kindness and emotional awareness, while a tablet on his chest shows colorful images and shapes that represent his own inner life. Pepper is easily the most ambitious household companion robot ever created, and he’s believed to be the start of a trend that will see humanoid robots caring for in-home patients and the elderly, and acting as companions for the insecure and lonely. A limited number of Pepper robots were sold in Japan this past June for 198,000 yen each, but don’t worry if you missed out. There are plans for Pepper to be even more widely available to consumers in the future, with additional features implemented into his 4ft-tall frame to make him even more immersive and life-like. 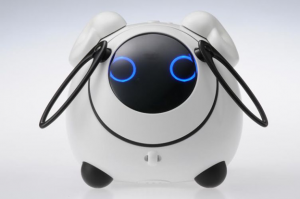 OHaNAS stands for—take a breath, it’s a mouthful—Organized Human interface and Network Artificial intelligence System, and is available only from Japan. Let’s keep things simple and just stick with the acronym. His name may be complicated, but among the plethora of Japanese robot toys, this sheep is sheer cuteness. Ever wanted to have a conversation with a robot sheep? After linking wirelessly to your smartphone, OHaNAS will communicate with you by searching the internet for information, telling your fortune, recalling personal data, offering meal suggestions, providing weather forecasts, playing your favorite music, and even imitating the voices of some of your favorite anime characters! The more you talk to him, the more he learns about you, and he memorizes your preferences so that each conversation becomes more and more personal and centered on your interests. Whether you want to talk politics, sports, food, or fandoms, this little sheep does it all.

OHaNAS loves to be petted, just like a real sheep… but don’t shake him too much, or he’ll get dizzy and pass out! 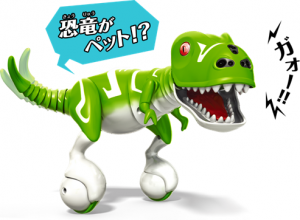 Some of us grew up hoping to own something more special than the average dog, cat, hamster, or parrot. Our childhood dream can be realized by owning a Takara Tomy’s award-winning (2015 Toy of the Year Award) robotic T-rex—a playful, interactive dinosaur who occasionally becomes very naughty and chases after you or snaps at your fingers. Pro tip: don’t pull his tail! His infrared sensor tracks where you are and what you’re doing, and he’ll chase after you if you aren’t able to tame him.

Hello! DINO rolls around on gyro-sensor tires, giving him quick, Raptor-like motion and speed. If he gets too rambunctious, you can use his controller to calm him down, or train him to respond to your commands—just like Chris Pratt in Jurassic World. 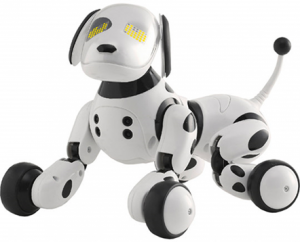 If a mechanical, prehistoric pet doesn’t strike your fancy, then getting your own Hello! Zoomer might be just the thing to scratch that itch behind your floppy, doggy ear. Able to recognize over 45 English and Japanese phrases, perform combinations of over 40 different actions on command, and respond to your voice and movement, this is one smart puppy!

Rolling, bowing, barking, and wagging, this Japanese robot toy has all the personality and charm of a real puppy with a cybernetic twist—from his animated, playful eyes to his springy tail. 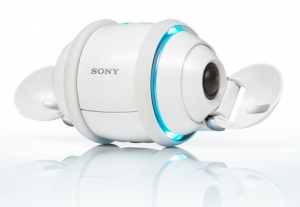 Rolly does more than stream and Bluetooth your favorite music—it raves out on the dance floor with some sick moves guaranteed to spice up your next party. The egg-shaped Japanese robot pivots and twists on its slick wheels, while waving, flapping, and spinning its cup-like wings. Rolly’s perfect sense of rhythm keeps every motion keyed on the beat. Duel lines of light let you gage how Rolly is responding to your music. Shake it until it turns purple to shuffle your songs, or repeat the process for light-blue, continuous play. Caught up in the music, Rolly, will flash and fade into a rainbow of colors—yellow, orange, red, purple, blue, or pink—depending on the flow and beat of the track. It’s truly something you need to see to believe.

Even among the other highly-coveted Japanese robot toys, the Sony Rolly is an extremely rare, discontinued collector’s item that robotics fans around the world are vying for. Stakeout on auction sites for a chance to nab one!

Where to Buy Cute Japanese Robots

The oft-said motto: “Robots are the wave of the future” might be true, but that doesn’t mean they’re all that affordable or obtainable in the year 2015. The good news is that a proxy and shipping service like FROM JAPAN can help you find great deals on retired Japanese robot rarities as well as the latest products. Don’t forget to shop at the FROM JAPAN store for these futuristic friends and more!

Fukubukuro 2020 – Get a second chance on Japan’s Lucky Bags!