Figurines and dolls have long been popular in Japan, and are not a recent trend as a result of modern anime and manga as some might believe. Centuries of innovation, creation, and refinement have gone into the hearts and souls of some of these most memorable Japanese works of art. Here is a guide all about the history, styles, and idiosyncrasies of these traditional Japanese figurines.

Ornamental Hina dolls date back to the Heian period from 794 to 1185. Their presentation is tiered in a hierarchy. Although there are differing organization patterns of each level according to different customs in Eastern and Western Japan, every level is organized in the same way from top to bottom. The first level holds the imperial dolls, the second level holds the three-court ladies, the third level holds the five male musicians, the fourth level holds the two ministers, and the final level holds the three helpers, or samurai. The dolls are placed on a gorgeous red carpet for all to see. Hina dolls are associated with Hinamatsuri, or Girl’s Day, which is every year on March 3rd.

Traditional Musha Dolls have been historically popular since 17th century. They are representations of warriors depicting historical moments of Japan’s martial past. Dressed in dark armor, the dolls interestingly conjure thoughts of battle and war. Though, recently, the doll’s faces have very boyish features that provide a stark contrast to the warrior image, conveying instead a sense of innocence. These paradoxical figures of feudal adornment and childishness are often made from the same material as Hina Dolls. These dolls are tied to an important part of Boy’s Day on May 5th.

Alongside Hina Dolls, these wonderful Gosho dolls have roots that dig back to the Heian period. Feudal vassals would journey to Kyoto to receive Gosho dolls as gifts from the Imperial Court for their service and loyalty. The dolls often have a shaven head with two patches on the side. Although, they can be found with a full head of hair, the shaven stripe is the traditional look. The dolls are often clothed in bright and interesting garments; some are actually naked. Gosho Dolls feature a white face and body, both generally round, and full. This touch of chubbiness adds to their collectible charm.

Are wooden dolls made with fine craftsmanship your cup of tea? Dating back to the mid 1700’s, Kimekomi Dolls were carved skillfully from wood with distinct creases. Conceived in Kyoto at the Kami Kamo shrine, their inception was the beginning of their popularity. Adorned with beautiful cloth, the variety of color and design is truly sight to behold since the folds of the cloth sit wonderfully in the creases of the wood. In essence, the wood carvings are shaped in the image of various living things, from people to animals, often with effigies draped in kimonos. Kimekomi Dolls cut a beautiful and unique figure.

Half machine and half doll, these strange works of art enjoyed their wonderful beginnings as early as the 18th century. These robots, or automata, represent an artful innovation that melds beauty and machine through their hidden inner workings of springs, cogs, and cams that are neatly and precisely assembled within. Traditionally, they are made from wood. There are three types of Karakuri that can be found, mainly tatami room karakuri, festival float karakuri, and stage karakuri. These robotic figurines can do a number of things, from serving tea to dancing to hypnotic movements—all on a very small scale, of course.

Bunraku puppets bring to mind the concepts of metamorphosis and enchantment. They are Osaka originals with a history dating back to the 1680s that has found a home in modern theatre. The puppets are carved carefully from wood and painted by hand, with the head and hands done by specialists due to their complex design. This design allows the faces to speedily transform from human to demon-like form during a drama. The body, costumes, and clothing are often designed and created by the puppeteers who operate them, a design synergy that helps give the puppets life.

Though usually considered a toy rather than a doll, the intriguing Daruma figurine encompasses luck and strength. The 18th century is home to the modern iteration of this talisman. It has a stout, chunky look. Hollow and varied in color by region of creation, it serves as a symbol of the great Chinese Buddhist teacher, the Bodhidharma. It is said the Bodhidharma was a master of wall staring who once gazed intently at a wall for nine years and lost his limbs due to atrophy.

Kokeshi is another handmade figurine that is pole-like or peg-like in design, with an origin stretching as far back as the 1600s during the Edo period. These cylindrical dolls have no arms or legs, a pronounced head, and are typically carved and shaved to shape from spun wood. The face is drawn with a few thin lines, with red, black, and yellow being the standard colors. Kokeshi were once sold in northern Japan as souvenirs to travels and visitors alike. 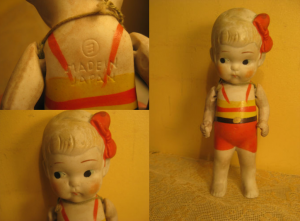 Bisque dolls were not the sole domain of Japan, as France and Germany beat them to the punch as early as the 1850s. However, Japanese Bisque dolls still have a certain allure. Nippon porcelain dolls were made in the early 1900s and up through the 1930s. Bisque dolls are made from unglazed porcelain, a concoction of clay and water. Because they are often crafted with vintage looks that are reminiscent of 1950s style Big Boy advertisements, these figurines are sure to spark a sense of nostalgia. Many of these collectibles items have an Anglo look, and sometimes come a bit heavy with cherubic cheeks.

Bring the Beauty of Traditional Japanese Dolls into Your Home

Japanese Origami Paper: How to Choose the Right Paper