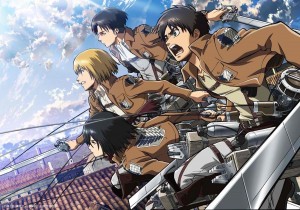 Attack on Titan is excellent source material for doujinshi. Although there are traces of romance between the characters, it is never directly shown. Fans have let their imaginations run wild with male-male pairings (Eren x Armin) and also conventional male-female pairings (Eren x Mikasa), giving rise to a large range of yaoi and adult doujinshi. Levi, meanwhile, is frequently made the subject of satire in gag doujinshi due to the sternness of his character.

Attack on Titan is a post-apocalyptic story of mankind driven to extinction by humanoids, otherwise known as Titans. Only one small population of humans survived the attack many years ago. These humans live within the shelter of three walls, known as Wall Maria, Wall Rose and Wall Sina, respectively. The walls have been so effective in blocking attacks that humans have lived in relative peace for one hundred years; many of the present generation has not even laid eyes upon the Titans. However, things start to change when one Titan pushes its way through the outermost wall.

This story is told through the eyes of the three protagonists—Eren Yeager, his adopted sister Mikasa Ackerman, and a friend Armin Arlert. After watching his mother being devoured alive by a Titan, Eren swears to wipe off all Titans from the face of earth. A plot twist is when Eren miraculously gains the ability to transform into a Titan at will after a deadly encounter with a Titan. 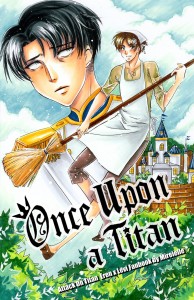 Main Characters of Attack on Titan

Tall in stature with a masculine form. They appear to devour and attack people for pleasure, as they have survived for 100 years without food. These Titans are gory and horrific, drawing inspiration from the paintings of the Spanish artist, Francisco Goya.

The protagonist of the story who holds a personal grudge against the Titans for devouring his mother. He joins the Survey Corps only to be devoured shortly after graduation. He emerged unscathed after the attack, miraculously gaining the ability to transform into a Titan at will, which gives him an added advantage against the Titans. He is passionate and startlingly loyal, willingly giving up his own life to save that of his friend’s, Armin. He also displays violent tendencies, particularly when he slayed Mikasa’s captors.

Eren’s adopted older sister. She vows to protect him with her life as he had previously saved her from some captors after her parents were killed. Mikasa is so protective over Eren that she makes it a point to tail him wherever he goes. She is also arguably one of the most skillful fighters on Survey Corps.

A childhood friend of Mikasa and Eren. He has low self-esteem due to his petite stature and poor combat skills. Unable to protect himself, he is a frequent source of worry for Eren and Mikasa, often relying on them to get him out of scrapes. Despite his subpar field tactics, he has a natural skill for strategizing, and saved his friends many times with his intelligence.

Levi is one of the best fighters on Survey Corps. His constant furrowing of the brows gives him a menacing look despite his short stature. One of his defining characteristics is his obsession with cleanliness, even to the point of keeping his battle gear clean at all times.

Where to Find Attack on Titan Doujinshi

If you follow Attack on Titan but imagine an alternate story arc or romance between the characters, there are several doujinshi that are dedicated to making these storylines a reality. As mentioned before, Attack on Titan doujinshi are often found in adult genres like Boy’s Love, though there are some doujinshi written for a more general audience.

See what From Japan has in stock. Visit our website for the latest in Attack on Titan doujinshi.

Also, be sure to read our articles “What Is Doujinshi?” and “Kuroko’s Basketball (Kuroko no Basuke) Doujinshi.”

Pokemon 20th Anniversary: How Will You Celebrate?