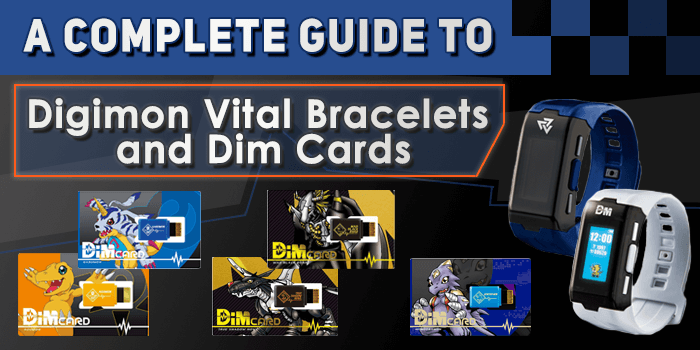 Have you heard of the latest Digimon toy that’s been gaining popularity in Japan and abroad? It’s called a Digimon Vital Bracelet. It’s used with something that looks similar to the SIM cards you use for your phone, and is aptly called DIM Cards.

Together, they make for a great toy that suits both young and adult Digimon fans alike. So without further ado, let’s learn all about this latest Digimon craze!

What is a Digimon Vital Bracelet? 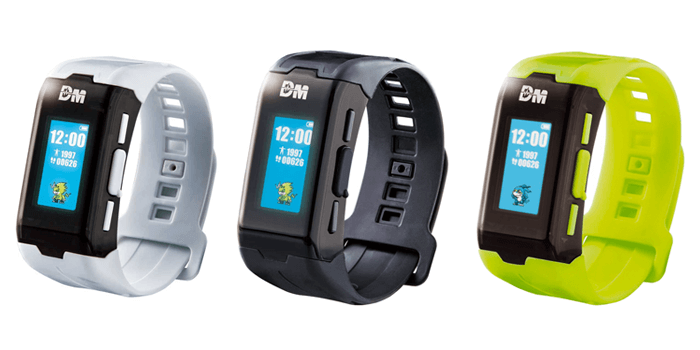 The Vital Bracelet is a wearable device you put around your wrist just like you would do for a watch. It helps keep you active because of how it tracks the number of steps you take and your heart rate while wearing it.

The main difference between this and a regular steps or heart rate tracker is that with the Digimon Vital Bracelet, you get Digimon linked to your bracelet. Your step count and heart rate then converts into your Digimon’s level, so it encourages you as the wearer to be more proactive with your fitness.

But the fun doesn’t end there! You can use the Digimon Vital Bracelet with NFC enabled smartphones and devices to trigger battles. You can also battle with your friends who own their own Bracelet by using a special DIM Card (which we will explain later on).

Lastly, if you install the accompanying app on your phone, you can record your daily activities, view missions along with your Digimon’s digivolution stage, and test your skills by battling other players online. 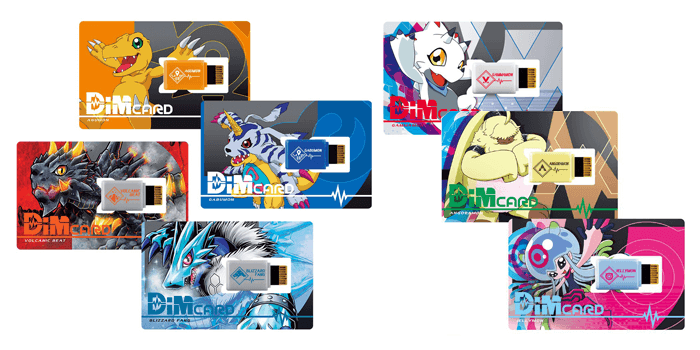 DIM Cards are the cards you use to unlock more Digimon, more Digivolutions, and a Versus mode. When purchasing a Digimon Vital Bracelet, they’re typically sold in a set which means you’ll always have a couple of starting DIM Cards. To use them, you’ll have to remove the slot cover at the side of your Vital Bracelet and simply plug it in!

Later on in this article, we’ll get into more detail about all the different DimCards that are currently available.

How many Digimon Vital Bracelets are there? 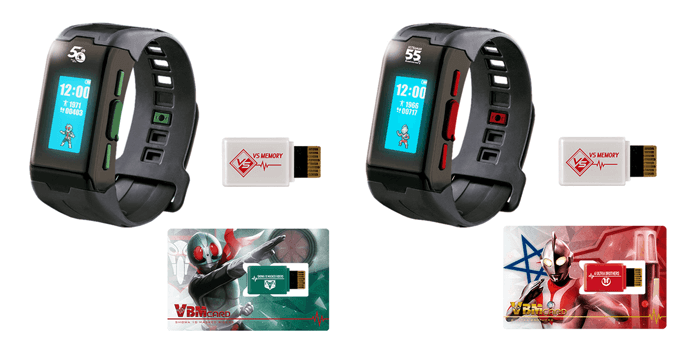 To start with, we’ll discuss a different type of Vital Bracelet you might come across. To avoid any confusion, we’ll talk briefly about Vital Bracelet Characters. It’s connected to two other franchises: Kamen Rider and Ultraman. So instead of Digimon, you’ll be evolving through the different Kamen Riders and Ultramen. You can visit the articles we linked if you’re curious to learn more about them.

The Vital Bracelet Digital Monster comes in three colors: white, black, and yellow green for the Special version. The black and white versions don’t have any usage difference aside from the color. They both come with the device itself, one Impulse City DimCard, a VS DimCard, and a charging cable. However, the Vital Bracelet Digital Monster ver. Special comes with all of that on top of an extra DIM Card (Ancient Warriors). 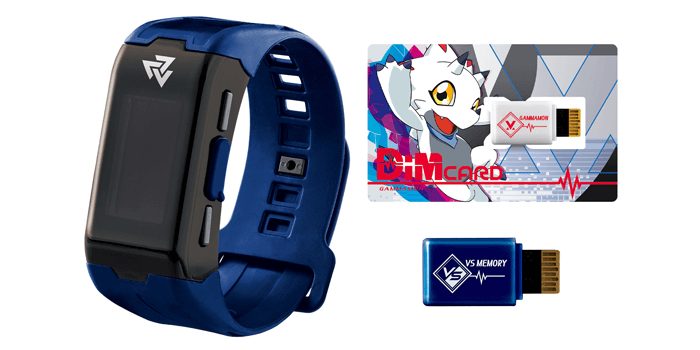 If you’re interested to get any of the Vital Bracelets we mentioned directly from Japan, you can click on any of the handy search buttons we’ve included in this portion!

What Digimon DimCards are available?

The first special DimCard we’ll get into is the one we mentioned earlier, the VS DimCard that comes with every Digimon Vital Bracelet. If you have a friend with their own Bracelet, you can use this to initiate battles with them. First, plug the Versus DimCard into your own device. It’ll load your current Digimon into the DimCard, and once that’s done, you can then plug it into your friend’s device and the battle will start! 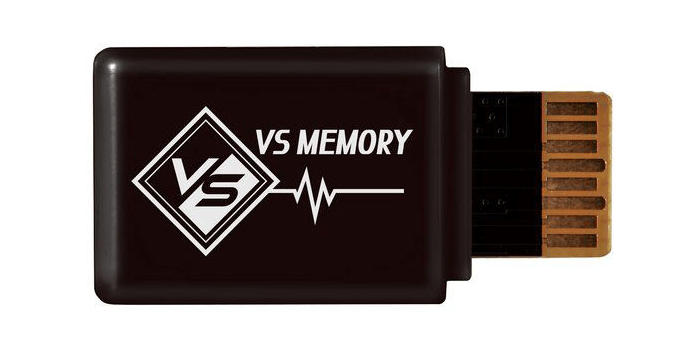 Now let’s get into the topic you’ve probably been wanting to know: what are all the cool Digimon and Digivolutions I can get through DimCards? So let’s go through them! 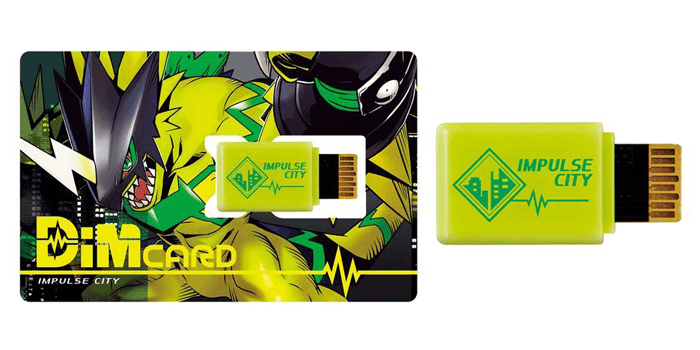 First, we have the standard DimCard that comes with Vital Bracelet Digital Monster devices. You start out with Dokimon and can digivolve your Dokimon to a total of 13 other Digimon, including Pulsemon, Bulkmon (as featured on the case that holds the DimCard), Pistmon, Shivamon, Achillesmon, just to name a few! So even if you only have the starting DimCard, there’s already so much you can get out of it. 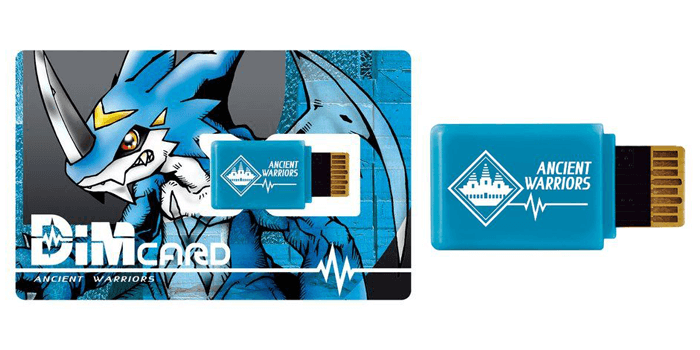 Next, we’ll talk about another starting DimCard, this time, it’ll be the extra DimCard that comes with the Vital Bracelet Digital Monster ver. Special: Ancient Warriors. Your starting Digimon will be Chicomon, and you can help it evolve to a total of 16 different Digimon, including the fierce-looking XV-mon from the Dim Card’s cover. 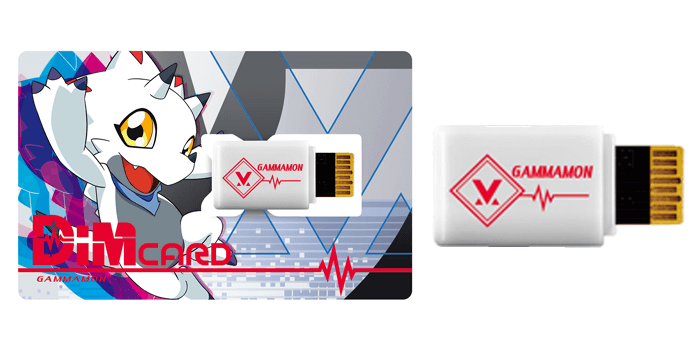 Gammamon and its digivolutions come as the standard Dim Card for those who get a Vital Bracelet Digivice -V-. Altogether, you’ll be able to go through a total of 13 evolutions connected to Gammamon, starting from the super cute Kurimon. 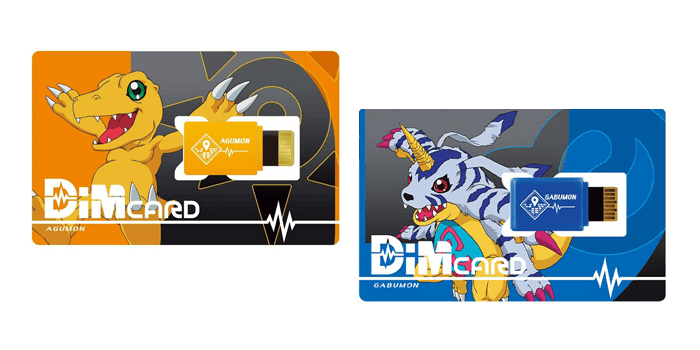 Next, we’re moving on to two of the most recognizable Digimon, Agumon and Gabumon, as featured in Dim Card Set EX Digimon Tamers Vol. 1. Both Dim Cards will unlock a total of 16 digivolutions for each Digimon. This set can be perfect to start with for long-time Digimon fans who want to add more ways to enjoy their Vital Bracelet.

One of the newest Dim Card sets in this list, the Dim Card EX Digimon Tamers Set Vol. 2 was announced at the end of 2021, and will be fully released during the latter half of February 2022.

With this expansion, Vital Bracelet players can add three more Digimon and their digivolutions to their device, with the Renamon Dim Card, the Guilmon Dim Card, and the Terriermon Dim Card. All three of them will have 16 digivolutions after their respective starting Digimon. 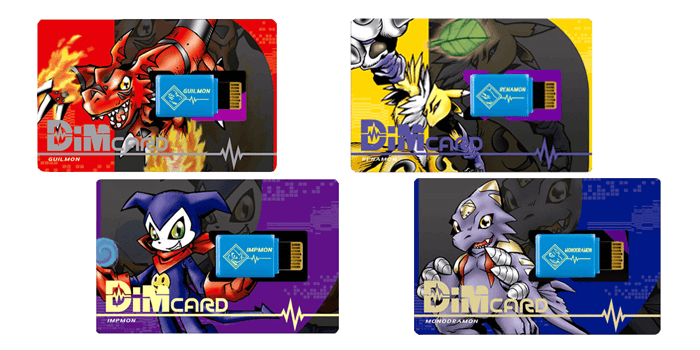 Although this set also has “Digimon Tamers” in the name, it’s important to recognize it consists of different Dim Cards from the ones we previously mentioned. The Dim Card GP vol.01 Digimon Tamers Set originally has a total of four included, namely a Guilmon Dim Card, Renamon Dim Card, Impmon Dim Card, and a Monodramon Dim Card.

While the original set that combines all four of them has sold out, you can still find the individual Dim Cards being sold in online secondhand stores in Japan. 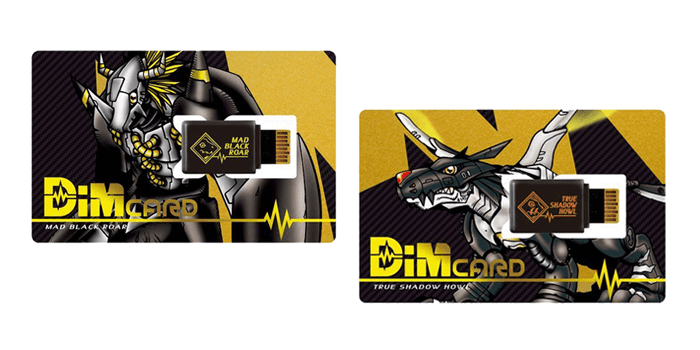 The Mad Black Roar & True Shadow Howl Dim Card set features BlackWarGreymon and MetalGarurumon as Vital Bracelet companions. These two powerful Digimon first debuted as trial versions during the release of the Digital Monster Vital Bracelet, but now they’re getting their complete versions in this set. 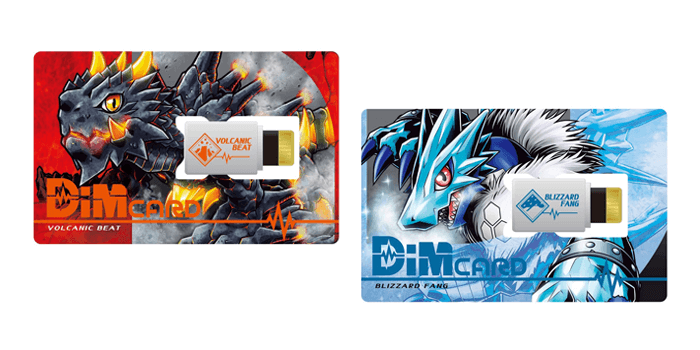 The next few Dim Card sets aren’t labelled with specific Digimon in the title, but instead are themed after different Digimon elements. As the name and visual implies, the Dim Card Set Vol. 1 Volcanic Beat & Blizzard Fang features the evolutionary routes for Digimon that live in volcanic and rocky areas (for Volcanic Beat) and in glacier and snowfield areas (for Blizzard Fang).

To give you some examples, some of the Digimon included in the Volcanic Beat Dim Card include the rock dragon Digimon on the cover, Lavorvomon, along with Tyranomon, Flaremon, and Volcamon. Meanwhile, in the Blizzard Fang Dim Card, you’ll get the icy Paledramon, Yukidaromon, Mammon, and Crescemon, just to name a few. 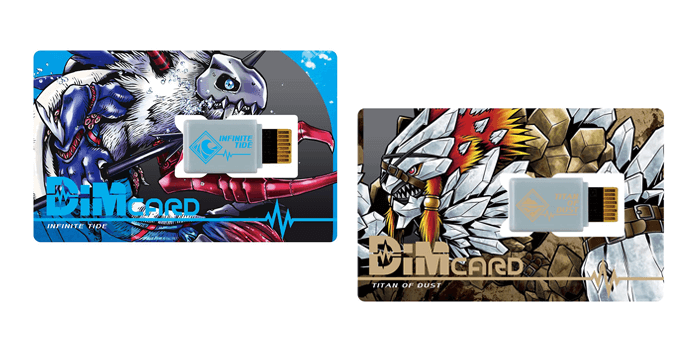 Vol. 2 of this elemental Dim Card series is the Infinite Tide & Titan of Dust Dim Card Set. The cover features Marin Chimairamon as one of the Digimon available under the Infinite Tide Dim Card, which also starts you out as the adorable Pichimon. The Titan of the Dust Dim Card, on the other hand, has the enormous ore Digimon, Gogmamon, on the cover, and will let you start out as the sand Digimon, Sunamon. Both cards have a total of 16 digivolutions. 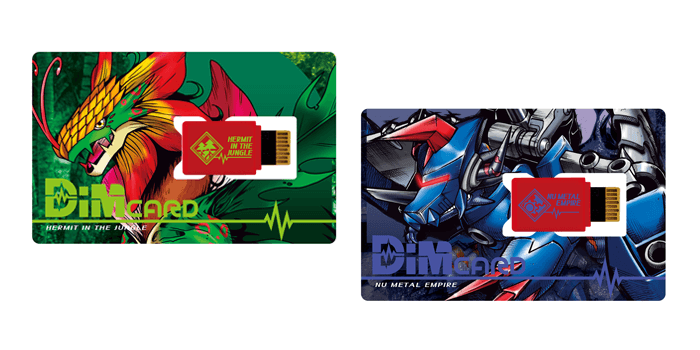 The last set (for now) that continues with the elemental theme is the Hermit in the Jungle & Nu Metal Empire Dim Card Set. The first of the two, Hermit in the Jungle, focuses on evolutionary routes for Plant Digimon, including Toropiamon on the cover, the vegetation Digimon Palmon, and the blooming Lillymon.

Meanwhile, Nu Metal Empire focuses on routes for Mechanical Digimon, starting out with Bommon, and including others such as Machmon, Locomon, and MetalMamemon. Each Dim Card unlocks 16 different digivolutions, both with an unknown Digimon waiting for you at the end. 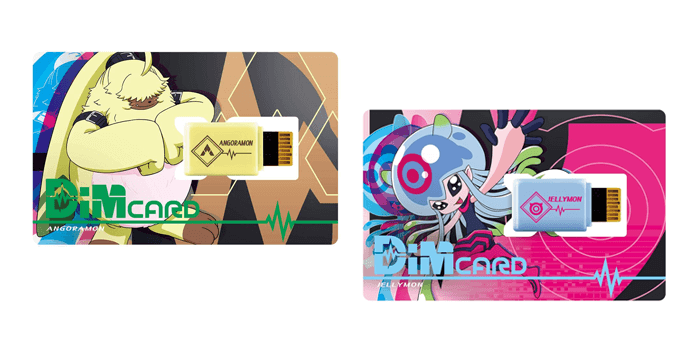 Earlier we discussed the Gammamon Dim Card being sold under the Dim Card Ghost Game name, and continuing with the series inspired by the latest Digimon anime, we have the Dim Card Set Ghost Game -V2-.

It features Dim Cards for two Digimon that appear in the show and their digivolutions: the furry Angoramon partnered with Ruli Tsukiyono, and the colorful Jellymon partnered with Kiyoshiro Higashimitarai. After plugging one of these cards into your Vital Bracelet, you can unlock a total of 13 digivolutions for each card. 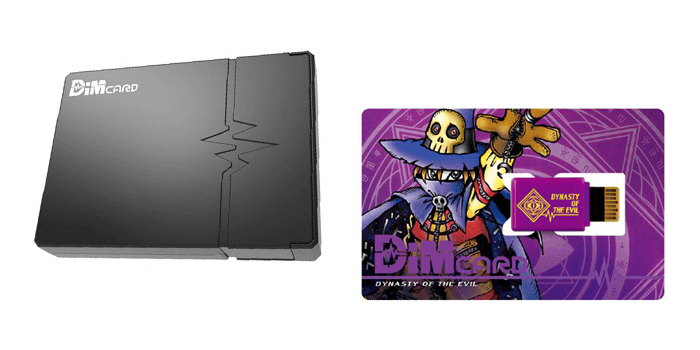 The Dim Card Holster is a related product also released by Premium Bandai. It’s designed to look sleek and be able to hold up to 5 Dim Cards inside. The first Dim Card Holster set that was released came with a new Dim Card as well, called Dynasty of the Eye. It lets you start out as the slime Digimon, Zurumon, which you can then unlock up to 16 digivolutions for. 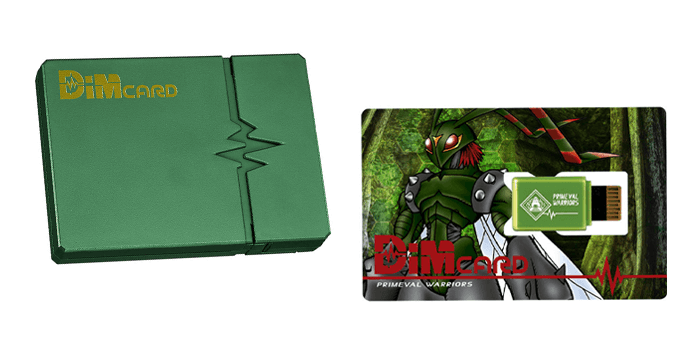 This is the latest Dim Card Holster set that as of this writing, is available for pre-orders with shipping schedule for March 2022. The green holster design matches the Dim Card it comes as a set with, Primeval Warriors, which has Leafmon as the starting Digimon with a total of 16 digivolutions.

And there you have it! You’re now up-to-date on everything you need to know about Digimon Vital Bracelets and all the different Dim Cards.

If you’re looking for an easy to way to purchase your very own Vital Bracelet or Dim Cards straight from Japan, FROM JAPAN is a proxy shopping service that utilizes a powerful search engine and verified sources so that you can buy items from Japan no matter where you are. This includes the latest releases and even Japan-exclusive items, so there’s no reason for you to miss out!

To get started, you can take a look at our Usage Guide to get to know how our site works, and if you encounter any issues, you can also contact our Customer Service team to help you out. We hope you found this article useful, and we hope you have a happy shopping experience!

Your guide to everything Vivienne Westwood

Back to the 90s: X-Girl Brand Guide

Pre-Loved Fashion: Why Buy Your Favorite Designer Brands from Japan?