Especially since the rise of sushi onto the international scene, many people around the world have become familiar with wasabi, a plant known to some as “Japanese horseradish.” That name might help to explain the power of the spice itself, but not its huge popularity. In fact, wasabi snacks are now practically their own genre in Japan! From the spicy to the sweet, here are 10 hot wasabi snacks that are guaranteed to spice up your life and clear your sinuses.

10 Japanese Wasabi Snacks to Spice Up Your Life

As the story goes, the inspiration for Wasabeef potato chips actually came from a Los Angeles restaurant that served roast beef topped with horseradish, the so-called “wasabi of the west.” Biting into a chip, the first impression is of a light and slightly sweet barbeque glaze—then the unmistakable taste of wasabi tickles the taste buds as you swallow. Wasabeef potato chips have been around since 1987, proving that inspiration can stand the test of time. 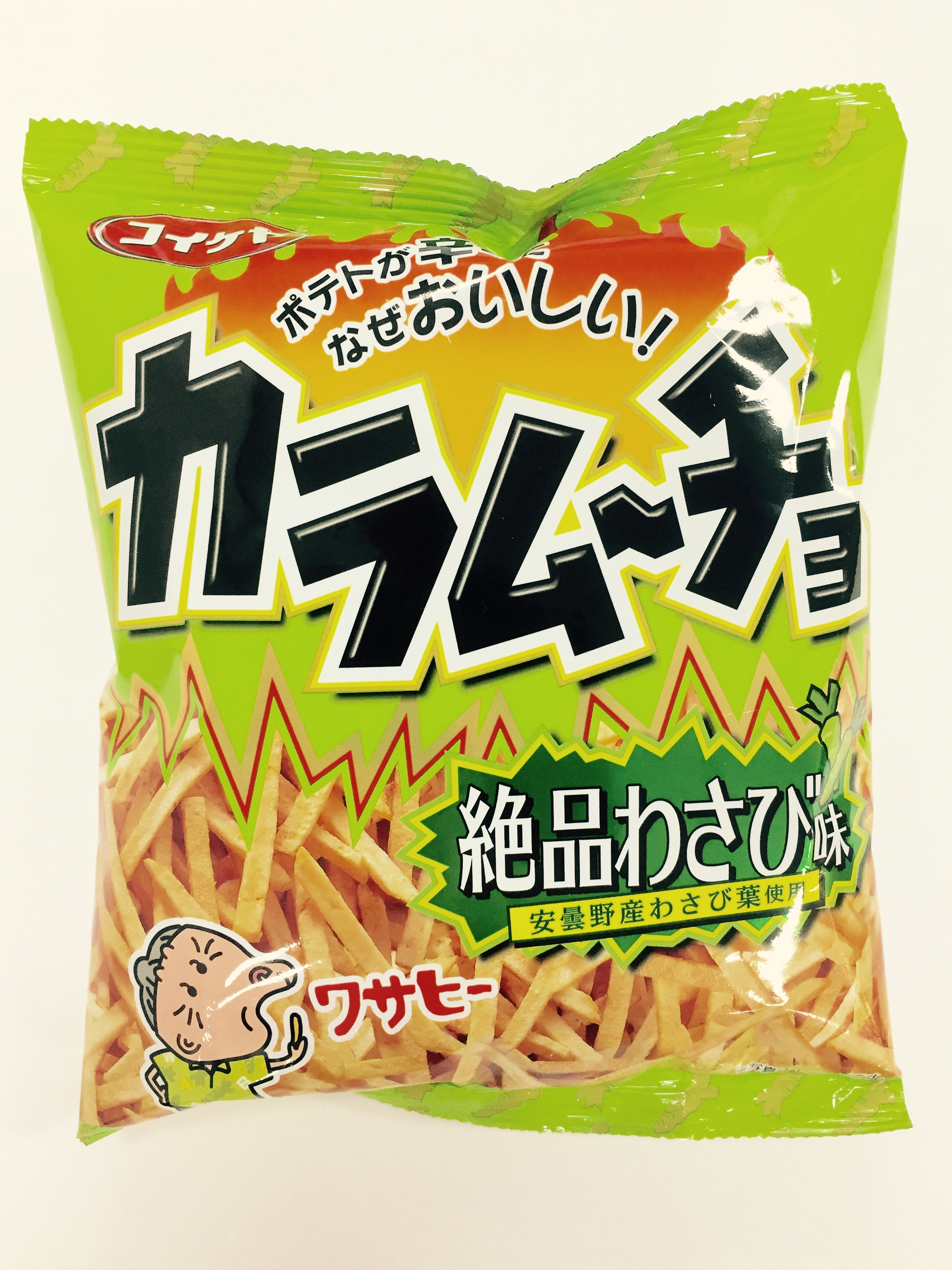 More like tiny fries than potato chips, Karamucho (“big spice”) Zeppin Wasabi Aji are best eaten by the handful—only then can you truly appreciate the addictive blend of garlic and wasabi that sets this snack apart from the rest. They use a famous type of wasabi from Nagano prefecture, and are perfectly at home with a Japanese-style beer and a few friends.

Kaki no Tane is celebrating its 50th anniversary, and that’s saying something in a country where food, fashion and pop culture trends tend to change on a whim. The endurance of this timeless mix of peanuts and kaki no tane—basically, teeny tiny rice crackers—also comes in a tasty wasabi variety. The peanuts give a mellow, aromatic and crunchy contrast to the wasabi-coated kaki no tane, the true source of this snack’s spicy kick. Even wasabi lovers agree: Eat this one slowly and save your nose!

Search for Kaki no Tane Wasabi

Named for the smiling wasabi-man on the package, Wasabi Noritaro offers an unusual blend of minced fish, seaweed and squid that has been oven-baked to perfection, creating a flat and hearty snack that is difficult to imagine but easy to love. The capper is the generous coating of wasabi oil, which adds a very spicy shot of mountain taste to all the seafood on parade. It’s a balance that works, and should keep you coming back—if you can handle the jolt you get in your nose every time you eat one! 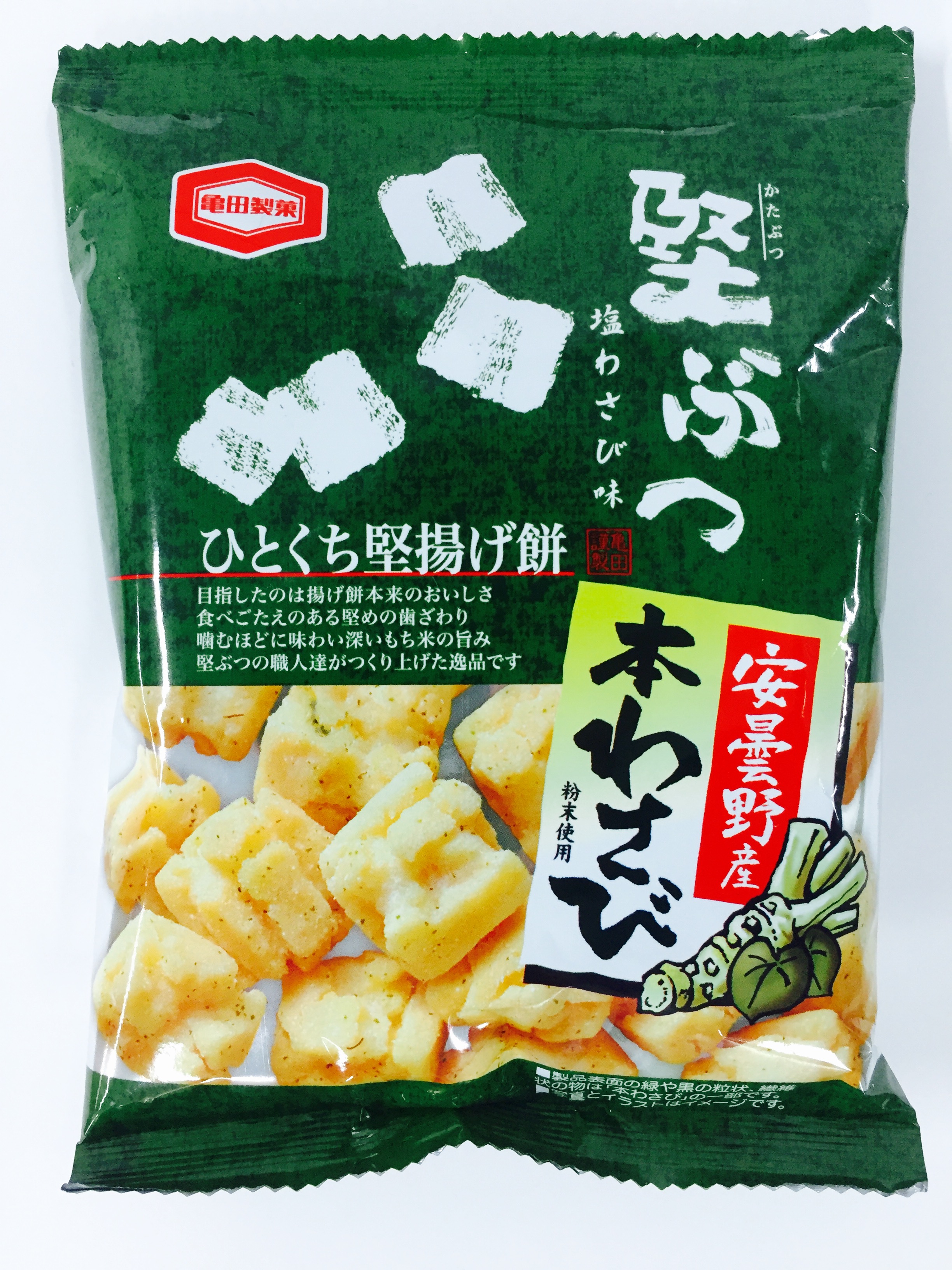 Kameda Seika’s Wasabi Katabutsu combines the mouthwatering flavors of salted, fried senbei (rice crackers), with just the right amount of wasabi essence, a satisfying crunch, and a pleasant chew. Another great snack option for pounding down a few well-deserved beers with friends or even while sipping on a relaxing cup of hot green tea while watching your favorite anime. The only problem we can find with these rice crackers is that they’re so addictive you’ll need to buy a new bag each time you get a craving! If you’ve got a craving, be sure to shop FROM JAPAN’s listing of wasabi senbei.

If you’re a fan of Japanese flavored snacks, you’re likely to have tried wasabi peas at least once in your life. Green Mame Wasabi Peas, popular both in Japan and abroad, offer a light, crunchy texture paired with a subdued wasabi flavor and a buttery aftertaste.

These rice chips, liberally sprinkled with wasabi powder, have a flavor that seems mild at first; pop one into your mouth and you will experience a pleasantly baked cracker tasting lightly of soy sauce. Bite down and let it sit on your tongue, however, and this little snack will rock your taste buds (not to mention your nose) with a wasabi explosion that rivals the real thing! Not for the faint of tongue, Wasabi no Tane (appropriately, “Seed of Wasabi”) should be enjoyed a few chips at a time—handfuls are for adventurers.

Search for Wasabi no Tane 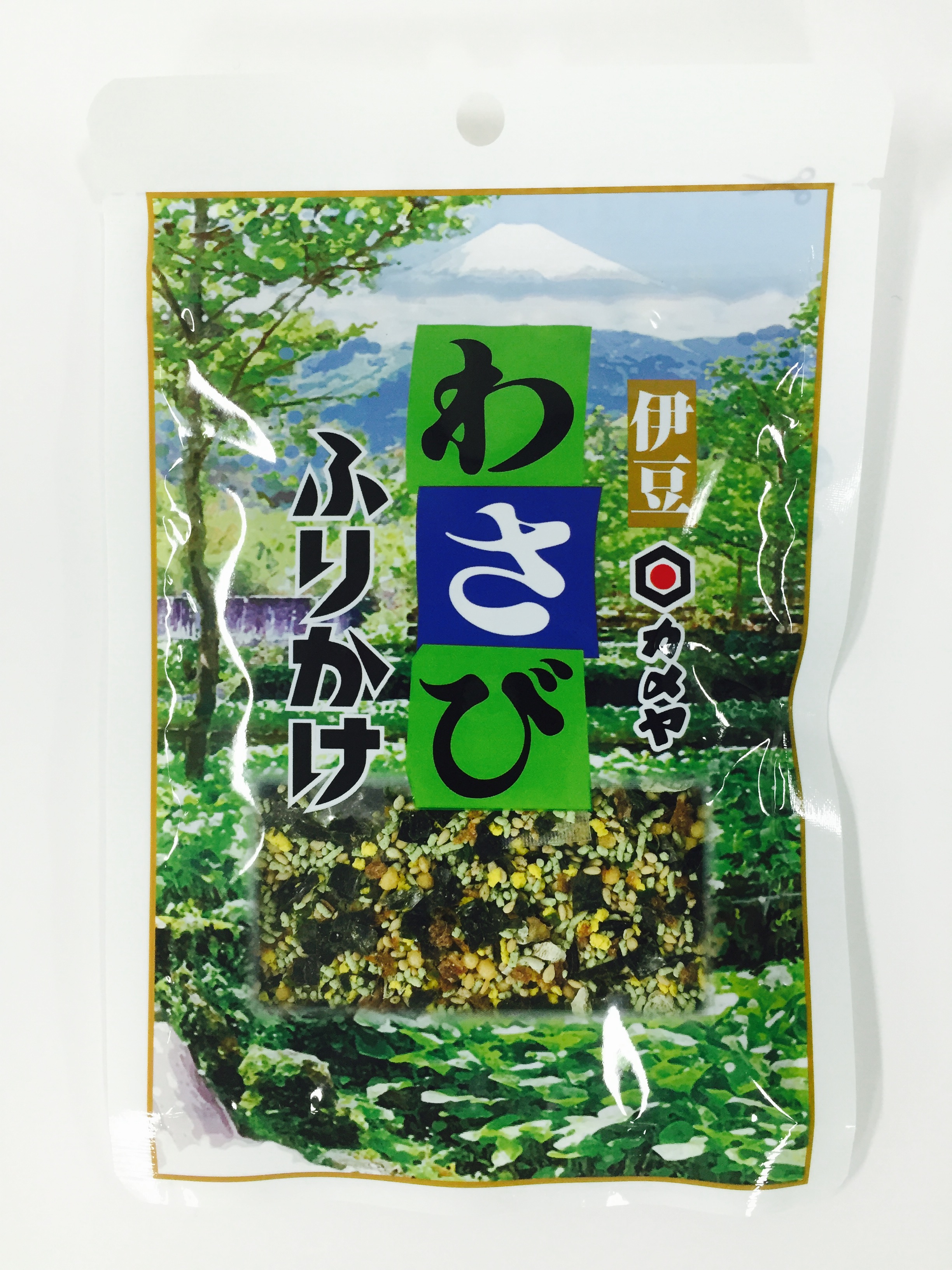 If senbei aren’t your cup of wasabi, there are healthier ways to add this uniquely spicy flavor to your nutritious snack repertoire. Instead of packing a bundle of celery sticks and raisins, try some delicious onigiri rice balls mixed with wasabi-flavored furikake.

What is “furikake,” you ask? A seemingly endless array of extremely popular seasonings in Japan that are used to add pizzazz to Japanese white rice—often featuring a well-balanced mix of unmistakably Japanese flavors, including dried bits of nori, sesame, umeboshi, salmon, vegetables, and more. Add to this a wasabi kick and you’ve got yourself some seriously genki food to go. 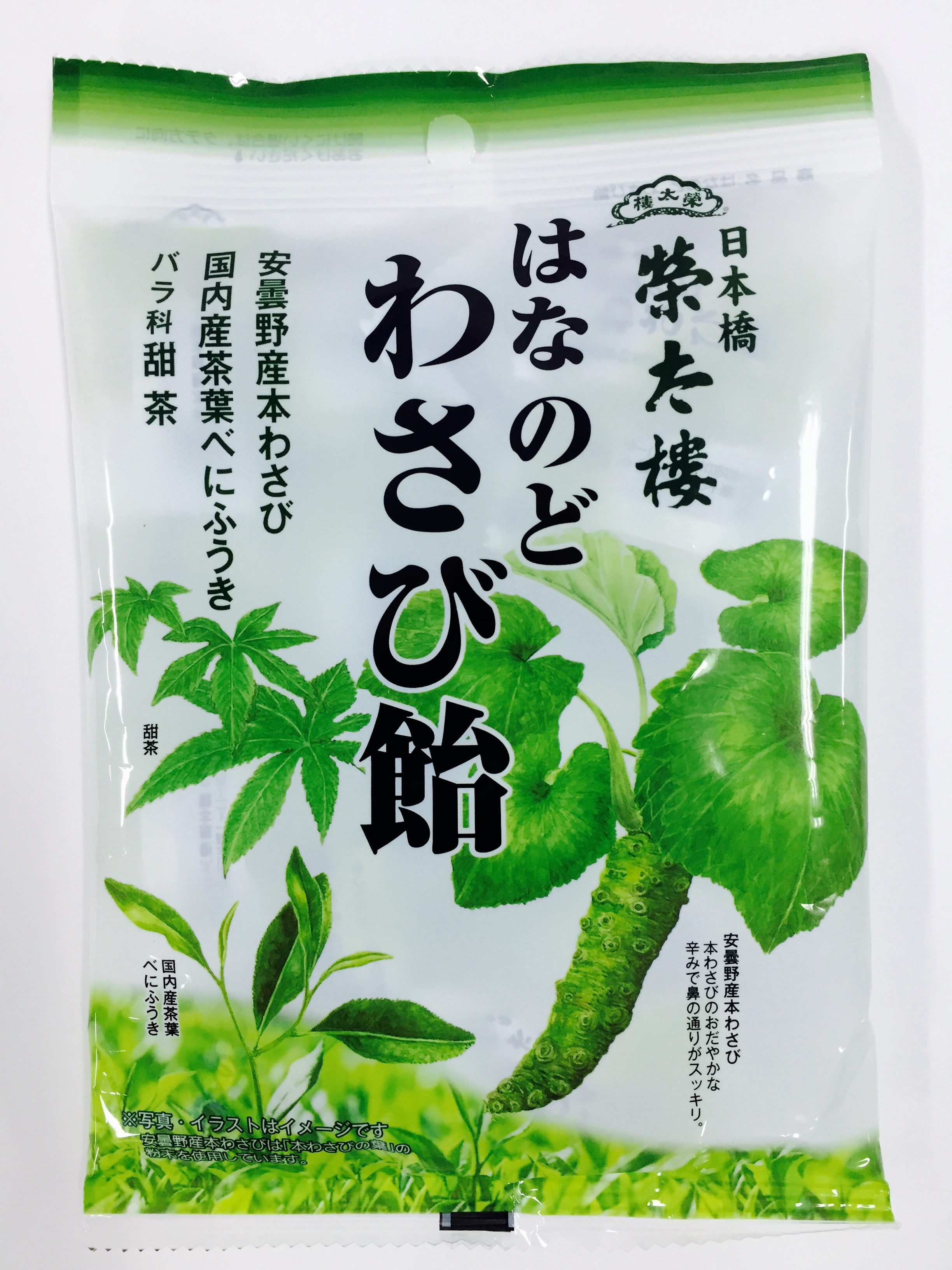 This candy lozenge, called simply “Nose-Throat Wasabi Candy” in Japanese, is as no nonsense as its name. The flavor builds slowly as you begin to suck, reaching a pleasant crescendo that actually tastes more like matcha green tea than wasabi. There is very little spice, but the tingling pays off—hopefully together with a much more comfortable throat. This candy rewards patience and is also surprisingly long-lasting.

Wait, what… Kit Kat come in wasabi flavor? If you don’t know about Japan’s obsession with limited edition Kit Kat flavors, the most popular being matcha flavor, then it’s time you begin to experiment beyond the standard chocolate coated wafers. While the combination of an American classic candy mixed with a flavor normally paired with sushi may leave you questioning your sanity, Wasabi Kit Kat are a fun novelty that offers a sweetly subtle hint of wasabi that young and old can enjoy.

Wasabi has risen through the ranks to become a world-renowned taste sensation all its own. Its fame is nowhere better expressed than in the parade of Japanese snacks that have been created in its name, some salty, some sweet, and most all with the promise of a spicy payoff. If these 10 snacks have got your mouth watering, there are many more just waiting to clear your nose and excite your taste buds! Visit FROM JAPAN for all the latest wasabi snacks and more.

Japanese Fans: Everything You Need to Know When Buying a Hand Fan

9 Traditional Japanese Dolls That Will Enhance Your Home’s Decor

How to Make an Origami Frog in 15 Easy Steps