The weather is warming up in Japan, which mean the spring festival is just around the corner – Hinamatsuri! Hinamatsuri (ひなまつり), also known as Dolls Festival, is one of the five seasonal ”sekku” festivals celebrated throughout the year. Celebrated on the 3rd of March every year, Hinamatsuri is also sometimes referred to as “Girls’ Day”, as it is a special day for families to pray for their daughters’ future success and happiness. 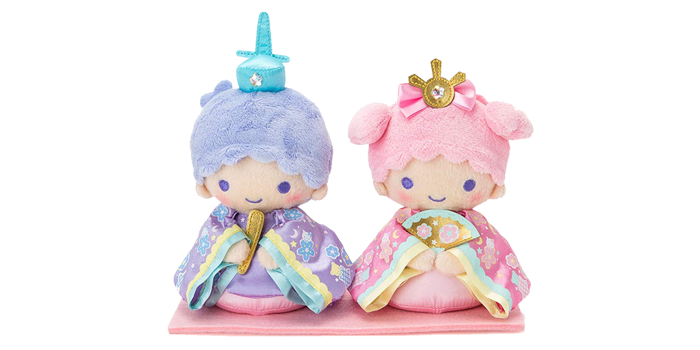 Hinamatsuri began in the Heian period (794-1185) as part of one of the five sekku seasonal festivals, collectively known as “gosekku”. During this period Hinamatsuri was known as the Peach Festival (桃の節句), as peach trees typically would bloom around this time. Despite the name change, peaches are still symbolic of Hinamatsuri and branches of peach blossom are often displayed beside the dolls.

In this early period of Hinamatsuri’s history, people believed that dolls had the power to control evil spirits. In order to banish homes from bad spirits, families would set the dolls afloat downstream a river. This tradition, known as “Nagashi-bina” (流し雛), still exists in some areas of Japan, but nowadays the dolls are later retrieved and returned to a temple to be ritually burnt.

It wasn’t until the Edo period of Japan that displaying the Hina Dolls in homes became a custom of the festival and the Hinamatsuri festival as we know it today was born. 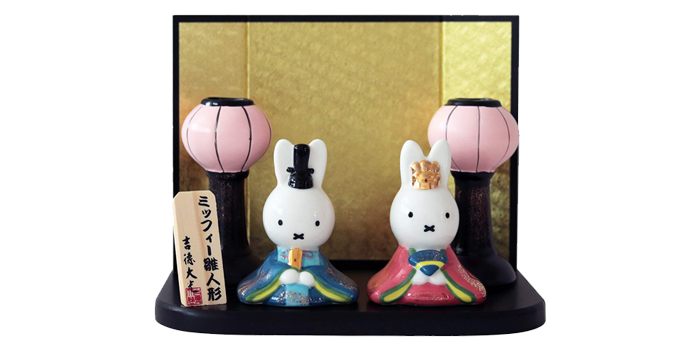 In modern times, young girls hold parties with their friends on Hinamatsuri and eat traditional dishes such as chirashi-zushi (sushi rice topped with raw fish and seaweed) and traditional Japanese sweets like hishi-mochi (multi-colored rice cakes) and ichigo-daifuku (strawberries wrapped in red bean paste). Traditionally, dolls were hastily packed away once Hinamatsuri passed, as according to superstition leaving the dolls out beyond March the 3rd would curse a daughter to a life of spinsterhood. Nowadays many families reject this outdated practice and keep the dolls on display throughout the month of March. 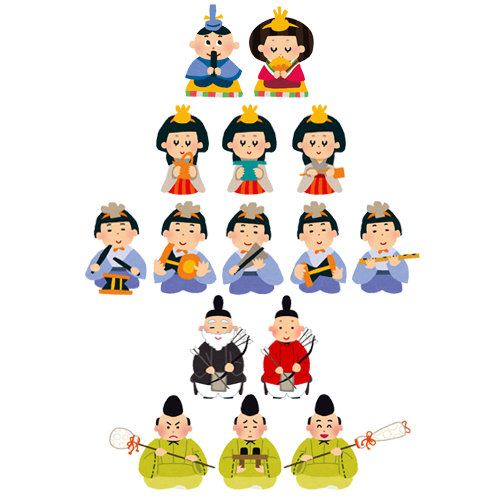 As the price Hina Dolls can run quite high, many Japanese families pass down their Hinamatsuri dolls from generation to generation, but often grandparents will gift a set of dolls to newborn girls.

The way the dolls are displayed can change depending on region and family tradition, but all Hina dolls are put together to represent a Heian Period wedding scene.
First Platform: The two imperial dolls known as the dairi-bana (内裏雛) are the bride and groom of the Heian wedding, who sit at the top platform. Although they are named the imperial dolls, they do not represent the Japanese imperial family.

Second Platform: The san-nin kanjo (三人官女) are three ladies-in-waiting that sit on the second platform serving tea to the rest of the court.

Third Platform: Five musicians known as the go-nin bayashi (五人囃子) each have their own instrument, apart from the singer who holds a fan.

Fourth Platform: Two daijin (大臣) ministers are placed on the fourth platform and serve as the court’s bodyguards or administrators. Sometimes they are equipped with bows and arrows.

Fifth Platform: Three shicho (仕丁), the protectors of the imperial couple sits on the fifth platform. They are displayed with a mandarin orange and a sakura tree.

Sixth and Seventh Platforms: The bottom platforms are used to display a variety of household items, including furniture, mirrors, sewing kits, and kimono storage chests.

Japanese Fans: Everything You Need to Know When Buying a Hand Fan

Japanese Washi Tape Crafts: Turn the Ordinary into the Oh-so-Kawaii!