Four years ago, the Attack on Titan anime devoured its competition like a hungry titan and gained colossal acclaim from its critics. Otaku quickly joined the ranks of AoT‘s “army” of fans, waiting for the day that season two would once again break down the walls of animated entertainment. In celebration of the anime’s highly anticipated second season premiere in April, we’re showcasing 9 Attack on Titan figures that every fan will want to recruit for the good of humanity.

END_OF_DOCUMENT_TOKEN_TO_BE_REPLACED

続きを読む9 Attack on Titan Figures to Sink Your Titanic Teeth Into

In 2013, otaku around the world echoed Attack on Titan’s fearless, Germanic catchphrase. Like a hungry titan, the series quickly rose to colossal heights and devoured its competition, becoming one of the most critically acclaimed anime franchises of all time.

Considered one of the few “crossover” anime series, equally popular with Eastern and Western audiences, Attack on Titan has inspired spin-offs, an official parody, a Universal Studios attraction, and a long-in-coming second season. While waiting for Eren’s anime adventures to continue next spring, be sure to sink your titanic teeth into these 10 mouth-watering Attack on Titan merchandises from Japan.

END_OF_DOCUMENT_TOKEN_TO_BE_REPLACED

Remember how we talked about how popular Attack on Titan (進撃の巨人）was in the last blog post? It was already pretty famous even when it was just a regular manga series, but when the anime came out this April, it became even more popular. So popular that even idols and celebrities watch it! If you don’t believe me, here’s a picture of AKB48 member Karen Iwata doing a cosplay of Mikasa, complete with the precious scarf that her adopted brother Eren gave her! Doesn’t she look cute? 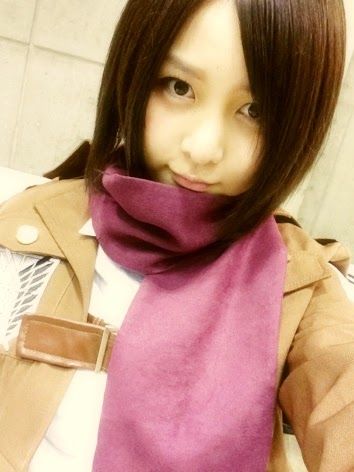 Other idol groups, such as SKE48, seem to enjoy the series too. Reina Matsui took a picture of her fellow group members, Akane Takayanagi, Airi Furukawa, Masana Ohya, and Rena Matsui recreating a scene from the anime. The gruesome event of a person being eaten by a Titan looks adorable instead now that idols are doing it! The feeling and atmosphere in this picture is completely different from the sense of despair you usually get in the series! END_OF_DOCUMENT_TOKEN_TO_BE_REPLACED

進撃の巨人 (Shingeki no Kyojin) or Attack on Titan is one of the most popular anime series this summer, and for a good reason! Its story revolves around mankind’s struggle against Titans, mindless giants who have an unsettling resemblance to humans and have caused so much death and destruction that survivors were forced to retreat behind walled cities to continue living.

The series itself is tightly plotted and beautifully animated, but what sets it apart from the rest is its complex, incredibly sympathetic cast. Eren Yeager, the main character, is probably the angriest, most bloodthirsty protagonist to ever be given the role of a ‘good guy.’ His defining characteristic is his intense hatred of Titans, and his desire to kill them all—but he’s so interesting because he’s so different from what people normally expect a protagonist to be. When he joins the Scouting Legion, a military branch who have been tasked to explore the world outside the walls while battling Titans, we get introduced to a huge array of interesting, believable characters—and since this is a series with an enormous body count, the fans watch each episode worried that their favorite might not make it to the next. (This is a legitimate worry—they really don’t, sometimes!)