Thanks to school-based anime series’ like K-On and Haruhi Suzumiya, the masses of school-related characters populating Japanese dramas, and the increase of idol bands like AKB48, the Japanese school uniform has continued to remain a very popular fashion style in Japan. And given how Japanese manga and anime in particular have exploded across the worldwide pop-cultural landscape, it’s only natural that some people outside Japan would want to buy and wear a school outfit to use for cosplay. Real school outfits can be expensive and, due to Japanese children’s small clothing sizes, they may not be appropriately sized for Westerners who want to import one. Because the designs are so incredibly popular, however, many companies have made replica school uniforms sized for foreign people of school age and beyond. Fortunately, these are just a fraction of the price compared to real uniforms. 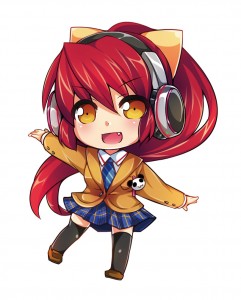 For those going for casual and cute Japanese fashion fusion rather than full-on cosplay, keep in mind that it’s possible to show off Japanese school uniform style within the boundaries of ordinary casual wear. With plaid skirts, bows and a white blouse making up the modern Japanese school uniform, it’s an easy style to replicate, mix, and match, giving you an element of Japanese fashion in your everyday wear. The standard sailor fuku often portrayed in anime and manga has given way to something much more diverse, thus allowing discerning fashionistas to experiment. It is not uncommon to see young women in other countries wearing Japanese school girl shoes, or even carrying Japanese school bags called randoseru. The randoseru backpack, carried by all Japanese Elementary School students, is like a large square and comes in a variety of colours, from plain blue and black to more colorful reds, pinks, greens and even yellows. They are also available in synthetic leather – however the cost for one of those reaches 60,000 yen! The more standard varieties may cost about half as much, which may explain why you see so many more of them around Japan. 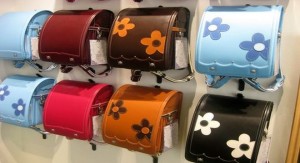 If you do decide to purchase a Japanese school uniform or related items like randoseru backpacks, just be sure you know what you’re getting into. People outside Japan may think that there is really only one type of uniform, but Japanese school uniforms are actually vastly different depending on the school, grade and even time of year.

Elementary School is the start of school life for Japanese children. A uniform is not always needed for elementary schools, with many letting the children wear whatever clothes they want – which is usually a t-shirt and shorts. In schools which require uniforms, the ensemble usually consists of a blue blazer and beige trousers. In the summer months they also wear a sun hat whilst walking to school. As mentioned above, one common item is the randoseru, the standard Japanese elementary school backpack that all beginning students carry with them. If you see a woman or girl in what looks like a High School or Junior High School uniform (both explained below) who is carrying one, chances are you are witnessing cosplay.

In junior high school, the Japanese school girl uniform becomes a sailor outfit. Known as sailor fuku, it was introduced as a school uniform in 1920. Whilst most know the female version of the navy sailor dress, the male uniform also has a naval style, with the blues and square shoulders. Many Junior High Schools have now adopted a more western style of uniform consisting of plaid skirts, blazers and a white blouse – or blazer, shirt and trousers for boys. This change was made in part due to the popularity and fetishization of the classic sailor outfit.

Girls’ High School uniforms share some basic similarities to Junior High School outfits in terms of both requiring a skirt. However, in High School the sailor suit aesthetic is more often than not replaced by a slightly more formal look on top, with a blouse and blazer becoming the norm. Also, whereas the more conservative Junior High Schools may even require ankle-length skirts, High School girls’ skirts are knee-length. Purely as a matter of fashion, many High School girls actually shorten their skirts so that they fall above the knee. Below is an example of a cosplayer emulating the High School look; why not try it out for yourself? 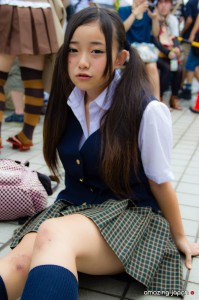 For boys the usual High School style is called ‘gakuran’. This style is often black or dark blue in colour and consists of a standing collar buttoned down from top to bottom. The buttons are usually embossed with the school emblem. Often male students will give their second jacket button to the girl they first fall in love with as a keepsake at graduation. The Gakuran style is primarily derived from European army uniform designs. 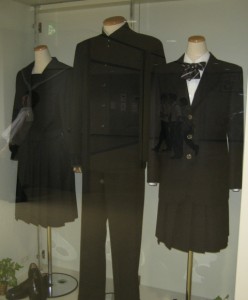 Unlike other countries, Japanese high schoolers have seasonal uniforms; one for summer and one for winter. The main reason is very clear: Japan is extremely hot in the summer and extremely cold in winter, making two types of uniforms absolutely essential. For girls, the uniform always consists of a skirt – but in winter, thicker and higher socks are utilized. For both genders, the summer uniform matches the Japanese principle of ‘Cool Biz’. For a period between April and October, Japanese workers and students can be seen without suit jackets, blazers or even neck ties; instead it’s very common to see students and business workers in a simple buttoned shirt with the top button undone. In Fall when it begins to get colder, sweaters and cardigans are worn in lieu of a blazer. Then in Winter, all students wear their full uniforms to keep warm. The uniforms are always styled in the same colors as the school, which is most often blue; pale creams are also commonplace.

Now that you know all the variations involved, you can go forth confidently in your search for the perfect Japanese school uniform!

How to Make an Origami Cube in 18 Easy Steps
Anime Swimsuit Figures to keep your Summer Hot in 2019
9 Traditional Japanese Dolls That Will Enhance Your Home's Decor
Japanese Sandals: What You Need to Know about Geta & Zori